Here’s why: With capacity for 150 dinner guests, the high-ceiling 8,000 square foot facility has an interior volume of 150,000 cubic feet – equivalent to a 15,000 square foot house – nearly six times larger than the average American home built in 2011. Homesol president Ross Elliott predicts Le Belvédère will have a winning annual electric heating bill as low as $600. 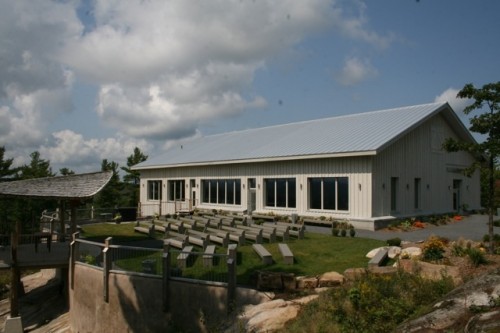 A Canadian Homebuilders Association (CHBA) member, Elliott wants to provoke building industry policy makers to aim higher, like Le Belvédère, for achievable cold-climate efficiency. “Le Belvédère is located about a half-hour outside Ottawa, Canada’s national capital, which features winter temperatures colder than Moscow, Russia. And yet we’re very confident we’re going to meet or exceed the Passive House standard,” he says. “I challenge CHBA and any other North American homebuilder’s association to tell its members why we’re still building houses to lowest common denominator standards while ecosystems are being decimated, wars are being fought and lives lost over energy security.”

“The simple truth,” says Elliott, “is that our industry can build better houses right now, and most certainly before 2030,” when he believes the national standard for home building should be scheduled to meet Passive House for all new buildings. Le Belvédère achieved a Canadian standard EnerGuide Rating of 95, which is approximately 90 per cent better than current Canadian standard building code.

Wintertime looks as if it’s freeze will soon be welcomed.