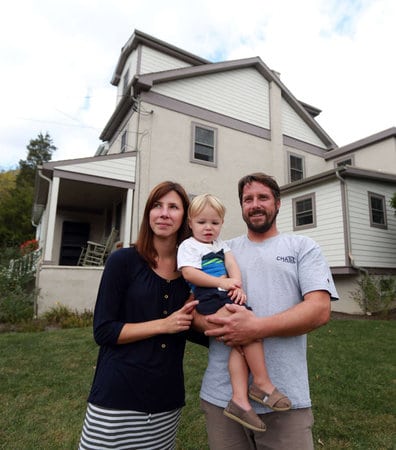 Matthew and Sue Seip recently purchased a house in Perkiomenville, Pennsylvania to be near family members who live in the Philadelphia area. Sue Seip, a professor at Philadelphia University, specializes in interior design, and Matt Seip has an architecture degree, so “we are very green-conscious, so to speak, and are both LEED-certified professionals,” she said. “Green building is the process of creating environmentally responsible structures and homes by efficiently using energy, reducing waste, and promoting human health,” Matt says.

The house they bought was built in 1920, so it had no inherent energy efficient features other than a southerly exposure. In fact, the Seip’s first plan was to demolish the existing structure and replace it with one that was more up to date and energy efficient, but they ended up liking the design and layout of the old house. As such, they decided to upgrade it to current standards instead.

First they added about 300 square feet of living space in what had been the attic. Then they upgraded to energy efficient windows and exterior doors with double-pane Andersen products.  A ceiling fan was installed in every room and the interior doors all had an inch cut off the bottom to improve air circulation.

The old plaster was removed so open cell foam insulation could be applied to the exterior walls. It “is a great air seal and is the highest-yield insulation,” Matt says. The finished interior walls are now sheetrock.

The couple used environmentally friendly adhesive to install new floors made of eucalyptus, a fast-growth renewable wood, and finished them with non-volatile-organic-compound paint. Next, Kohler low-flow plumbing and a high-efficiency heat pump went in.

On the exterior, Michael replaced the existing vinyl siding with HardiePlank, a cement based exterior covering that has excellent insulating qualities. Then all the appliances including the water heater were replaced with Energy Star rated units and LED lighting fixtures were installed throughout the house. The Seips even placed a rain barrel under a down spout to collect water for gardening.

All the improvements have made their home one of the most energy efficient dwellings in the neighborhood. But sometime in the future, the Seips want to build a “net zero” home, one that generates as much energy as it uses. He is hoping Minnesota-based Andersen will start making super efficient triple-pane windows in time for that project.