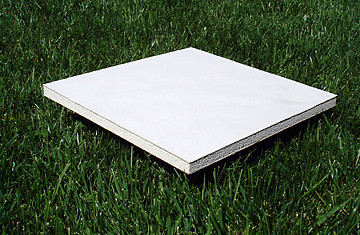 Editor’s note: Drywall isn’t the sexiest of subjects, but, as our friends at GreenBuildingTalk note, it’s the most used interior building material out there… and also has a substantial environmental footprint. Serious Materials new EcoRock product is attracting attention among a number of audiences… including investors. This post was originally published on Wednesday, June 4, 2008.

Serious Materials, an indoor building material manufacturer, successfully raised an impressive $50 million in late 2007 to support its efforts in bringing it’s new green dry wall product to the marketplace. The venture capital funding is in response to Serious Material’s 2006 research and development success that discovered a way to replace the energy-intensive calcine process used to make drywall. What the company came up with was a gypsum-free drywall they named EcoRock.

You may not think much about drywall, but it is the most common indoor building material in the United States. It does have a dirty secret, though. Typical drywall consist of gypsum, a calcined product which, like cement, needs to be cooked. Basically, it’s calcined (a thermal treatment process) and then dried. That energy-intensive process generates some 20 to 25 billion pounds of CO2 a year. The energy used to make a standard sheet of drywall is 100,000 BTUs or more per sheet, 4×8. When factoring in how much the drywall industry produces a year as a whole: upwards of 30 to 40 billion square feet in the U.S. alone, the CO2 emissions become staggering. In fact, the drywall manufacturing process produces 51 million tons of greenhouse gases and consumes almost 1 percent of all U.S. Energy annually.

EcoRock uses a new material science in which it doesn’t need to be calcined. Its components- a specific formula that is a company secret- are mixed. A foamer is added, the mix heats up on its own, cools down and then is set into a usable block of drywall. This gives it the lowest carbon footprint of any drywall product on the market, and makes it well suited for sustainable development and LEED projects. It is also recyclable; the boards can be recycled to make new board, where as most conventional drywall is thrown away, although many landfills are banning the dumping of drywall because of massive amounts of space it takes up.

EcoRock will be sold at about 1 percent more than premium drywall, and will available in 1/2 inch and 5/8, fire rated, for both commercial and residential. Serious Materials already has an existing business, the Quiet Solution line of noise-reducing wood, drywall, glue and other products. So, the company already have over 4,000 dealers lined up that will be distributing EcoRock.

The company is investing a portion of the VC funding into building a plant in Lysander, NY, bringing hundreds of famed “green collar” jobs to the area. The plan calls for construction to begin in June, with the building in operation by December. The company also owns three other plants — two in California and one in Colorado. EcoRock will start being sold in the second half of 2008, with high volume production starting in 2009.

This year, Serious Materials was voted #1 at Cleantech Venture Forum XII, was named to AlwaysOn’s Going Green Top 100; as well as Greentech Media’s Top 10. They’ve also been highlighted in several publications such as Fortune, Time and Businessweek. There is a huge opportunity to address climate change with advanced materials, and Serious Materials is leading the way in this category.