Join me for Part IV of this interview series with John Perlin concerning our forests. Today’s subject: “Fighting for Photons,” a subject about which Perlin knows plenty.   He is the author of two diverse and important books which explore this subject: “A Forest Journey: the Story of Wood and Civilization,” and “Let It Shine: The 6,000-Year Story of Solar Energy.”

If you have missed our previous interviews, you can catch up here:

Perlin, a professor of physics at University of California Santa Barbara, is also the world’s leading forestry historian, and his book on forests, first published in 1989, was recently republished in a third edition. Here the physicist and historian joins me to discuss a fundamental ingredient leaves and solar cells use: photons. 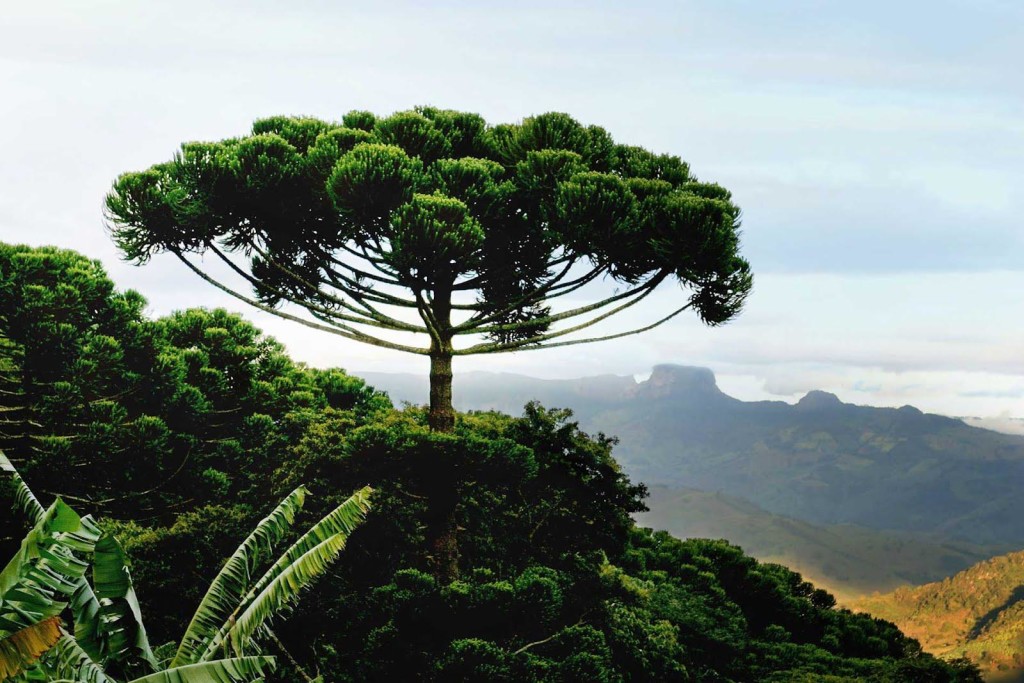 Photo of Araucaria angustifolia (Pinho do Paraná) a tropical pine. Notice its foliage is horizontal to the sky to maximize photon harvesting where the sun is almost always perpendicular to its leaves.

Perlin: Both leaves and solar modules’ principal function is to harvest photons – light generated by the sun. And because of this common function, both the “tilt” of the branches of a tree and solar collectors depends on the latitude so they can maximize their harvest. It is for this reason that trees at high latitudes have a cone shape while at latitudes near the equator the branches spread out horizontally to catch the much higher equatorial sun.

Meyers: But don’t the leaves use sunlight to make use of carbon dioxide and release oxygen, while solar modules transform sunlight into electricity?

Perlin: This might surprise you, that at the beginning of the photosynthetic process, photons cause the flow of electrons just as they do in a solar cell. And that movement is called electricity.

Meyers: Are there other similarities?

Perlin: Like the more efficient and more costly solar cells, different types of chlorophyll allow the leaf to harvest photons at various wavelengths to maximize the solar energy absorbed and used. Also, while most think it is the shade provided by leaves of trees that cools all things underneath on a hot day, it is actually the capture and use of photons by their leaves that prevent sunlight from striking the earth and changing its energy into heat that makes a grove or a forest such a comfortable retreat on hot days. Rooftop modules do the same. They capture photons that would otherwise strike the roof and consequently make the house much more uncomfortable during the hotter days of the year.

Meyers: Do leaves make use of photons for other purposes than do solar cells?

Perlin: Yes, They do what scientists have dreamed of doing for many years – using incoming photons as the energy source to efficiently separate hydrogen and oxygen from water. They throw out the oxygen into the air and combine the hydrogen with the incoming carbon dioxide to feed themselves. They therefore are carbon dioxide scavengers and oxygen donors. It is for this reason that the real green revolution – the advent of plants and trees begun hundreds of millions years ago – tempered the earth’s temperature and oxygenated the world.

Meyers: Can you be more specific?

Perlin: Consider this: Through photosynthesis, thanks to harvesting photons, one ton of wood consumes nearly two tons of carbon dioxide and releases a little over one ton of oxygen. Burn a ton of wood and you get just the inverse – the release of almost two tons of carbon dioxide and the consumption of a little over a ton of oxygen. These figures truly spell out how the burning of billions, perhaps trillions, of tons of coal – which consist of ancient plants and trees – over the last four centuries has added so much carbon dioxide to the atmosphere.

Meyers: So, for leaves and solar cells it’s all about photons?

Perlin: Correct. Increasing bountiful photon harvests by leaves and solar cells bodes well for life on earth.  For a bright future, let us hope for greater and greater yields.

About this Author: John Perlin is author of four books: “A Golden Thread: 2500 Years of Solar Architecture and Technology;” “A Forest Journey: Wood and Civilization;” “From Space to Earth: The Story of Solar Electricity;” and his latest book, “Let It Shine: The 6000-Year Story of Solar Energy.” Harvard University Press Chose “A Forest Journey” as one of its “One-Hundred Great Books” published by the press, as well as a “Classic in Science and World History.” The Geographic Society and the Sierra Club chose the book as their “Publication of the Year.” “Power of the Sun” and “Sunrise” are two documentaries for which I did the screenplays. “Power of the Sun” was done in collaboration with two Nobel Laureates at University of California, Santa Barbara, where I am now a member of the Department of Physics.