Trina Solar released its Q1 2014 financial results on May 21st. It revealed that Trina Solar’s profitability and module shipment guidance have improved for Q2’14.

According to the DisplaySearch blog:

“Looking back, Yingli Green Energy was close to this benchmark during Q4’13, with record industry shipments then of more than 900 MW. In early June, Yingli will release its guidance for Q2’14, and may also provide data which approaches – or even exceeds – the 1GW level for quarterly shipment guidance.”

Both Yingli and Trina made strides with a noteworthy increase in quarterly module shipments, as shown in the graph. 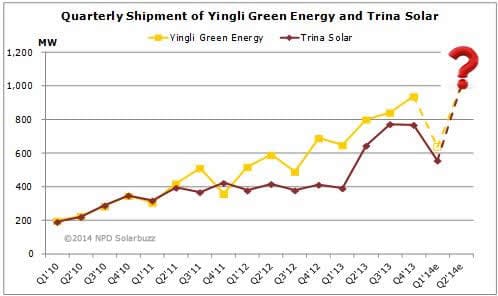 Despite these improvements, Sharp Solar is now the largest global supplier of PV modules (by volume) for Q1’14 because Yingli and Trina missed guidance at for that quarter. However, that may change in Q2’14.


« 6 Building Materials of the Future