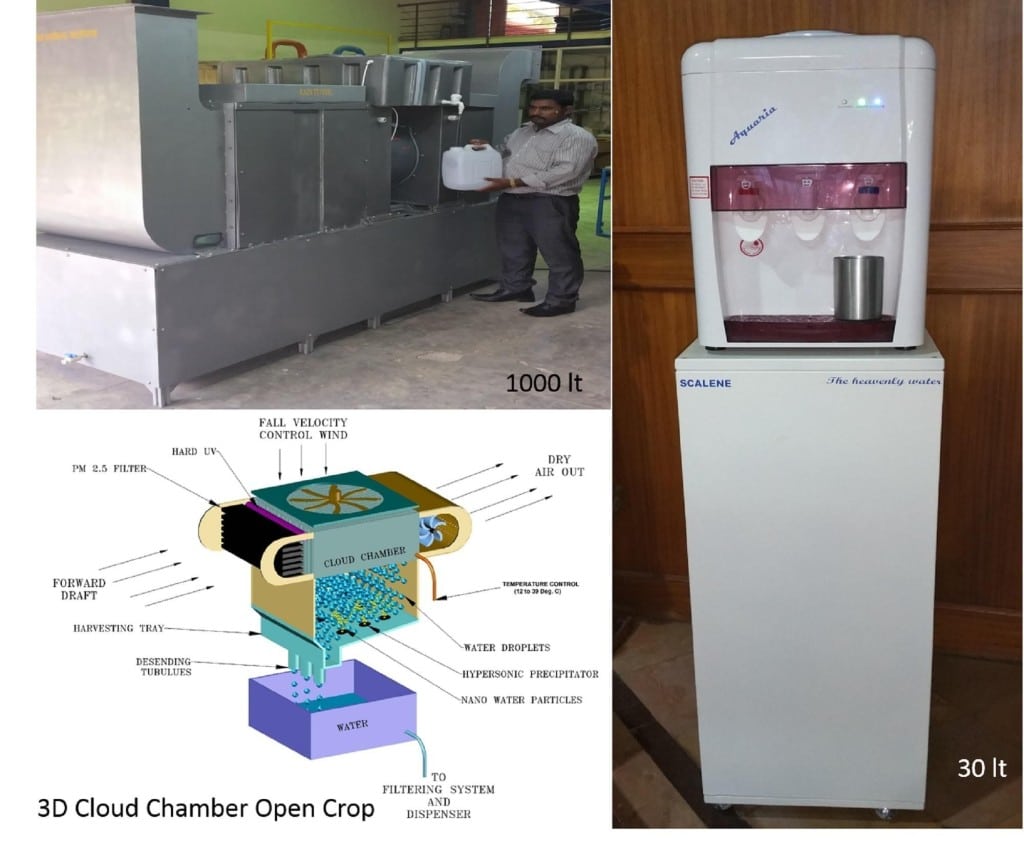 New technology from Bangalore promises clean drinking water by drawing moisture from the air.  Rain Tunnel Technology, invented by Dr Rajah Vijay Kumar, Chief Scientific Officer at the De Scalene Research Organization, will soon be available for both commercial and household use.

Getting water from the atmosphere is not new. It has been around for more than 500 years but has never been really successful. All the techniques used up until now were based on condensing the air to extract the moisture out, which amounts to chilling the air to a very low temperature. This technique requires a lot of energy and works only if the humidity in the air is quite high, like 65 to 70%.

A device in the Rain Tunnel called a Hypersonic Precipitator uses extremely high frequency sound waves, in the range of multiple million cycles per second, to produce nano-water particles which are smaller than 20 nanometers. Invisible water particles of this size can freeze at a temperature as high as 10 – 15 degrees Centigrade under specific conditions, which are created inside the Tunnel chamber. This leads to the rapid growth of nanometer ice crystals by vapor deposition at the cost of a very small amount of water from the cloud that has formed inside the chamber.

Precipitation (rain) starts inside the Active Cloud Chamber of the Rain Tunnel. The rain is then collected in a food-grade tank and treated with a five-stage process when the water is ready to drink. Water is never treated and stored, as stagnant water can get contaminated.

The secret of the technology is an on-board computer that controls the complex operation of creating the right weather conditions inside the chamber. Because of this, the Rain Tunnel can produce drinking water even with only 10 ppm (parts per million) of moisture present in the air surrounding it. It requires less energy and is more efficient than other systems and is entirely different from anything available anywhere else.

“So far we have designed and readied for production … a household ‘Rain Tunnel’ machine that can produce 30 litres of clean drinking water for a family. This is a standalone plug-and-play machine that can be simply plugged in to any power outlet and you have 24 hours of drinking water. It comes with a built-in dispenser providing chilled water at 8 degrees, hot water at 90 degrees and water at room temperature with cost of only 87 paisa per litre,” said Dr Kumar.

“As a part of our scale-up process, the Rain Tunnel Technology was successfully applied to produce 100, 500 and 1000 litres of water per day. We are in the process of building a 10,000 litre per day Rain Tunnel system, to produce about 3.6 million litres of clean drinking water per annum for a community or even farming. When running with utility supply, the average cost of water will be about 67 paise,” he said.

The Rain Tunnel system will be available for purchase in about two months.