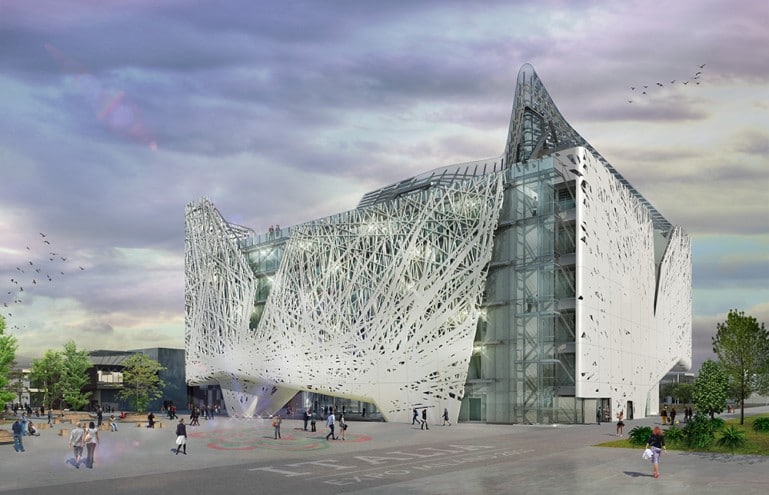 Air-purifying cement will comprise most of the exterior facade of the Palazzo Italia in Milan, Italy.  The unique pavilion will be made from a special air-purifying cement created by Italcementi and will stretch over 9,000 square meters (96, 875 sq ft), requiring an estimated 2,000 tonnes (2,204 tons) of cement to accomplish the feat.

“The entire outdoor surface and part of the interiors will consist of i.active Biodynamic cement panels,” says Italcementi.  The cement will be treated with the active ingredient in air-purifying cement, TX Active.

“In direct sunlight, the active principle contained in the material ‘captures’ certain pollutants present in the air and converts them into inert salts, helping to purify the atmosphere from smog.”

According to a press release from Italcementi regarding TX Active:

“With what we have termed urban photocatalysis,” explained Enrico Borgarello, Group Research & Development Manager for Italcementi, “in the presence of air and light a natural process of oxidization is created which leads to the decomposition of organic and inorganic substances present in the city.

Let us take, for example, nitric oxides and dioxides, sulfur dioxides, carbon monoxide, i.e. some of the elements which we see controlled everyday by air monitoring stations: the photocatalytic reaction which occurs on the surface of the material treated with TX Active, thanks to its cement matrix transforms these pollutants into salts which have no impact on the environment and health.

Laboratory tests have shown that just 3 minutes of exposure to the sun is sufficient to obtain a reduction in polluting agents of up to 75%.”

Independent research in real world settings has shown that the cement can purify 20-70% of air pollutants, depending on atmosphere and light conditions.

The architects, Nemesi & Partners, wanted the building to act like a kind of urban jungle, not only aesthetically but by also mimicking the role of trees in city landscapes – which naturally help purify the air.  Inspired by nature, the final design resembles large stretched out tree branches which wrap themselves around the iconic building.

Palazzo Italia will be a central feature of Milan Expo 2015, and the cement facade is scheduled to stay as a permanent feature long after the expo winds down.

Strength and Design in Concrete Forms »