SEATTLE, WA – A new report and infographic released today by the Seattle Office of Sustainability and Environment on building energy use reveals that Seattle building owners are poised to save tens of millions of dollars on energy annually by improving their building’s energy efficiency. Seattle also recently released its Resource Conservation Management Plan, which sets guidelines for reducing energy use in City-owned buildings 20% by 2020. 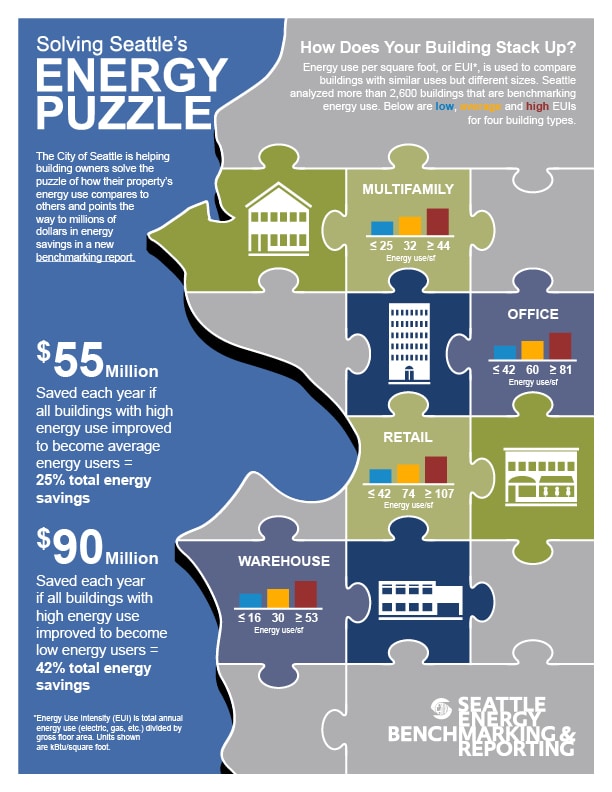 The analysis of the data found that:

To help Seattle owners see how their building’s energy use stacks up to their peers, the analysis established performance ranges for 13 different building types based on their reported 2012 energy use. For example:

Many Seattle buildings are more energy efficient than buildings nationally

Of the 890 buildings in Seattle that received U.S. EPA ENERGY STAR scores in 2012:

With the publication of this report, Seattle building owners can see for the first time how energy use in their building stacks up against other buildings in the city and nation. The report will also help buyers, tenants and lenders see how the energy use of buildings they are considering buying, renting or financing compares to other buildings.

To date about 93% of buildings have had 2012 data reported to the City—the highest compliance rate in the nation for benchmarking laws. Seattle is one of nine U.S. cities with benchmarking ordinances.

“Thanks to the Seattle benchmarking program, we are now regularly tracking our energy use and finding new ways to save energy and money,” said Bob Anderson, CEO of Seattle’s Horizon House retirement community.

After benchmarking its buildings, Horizon House staff and residents went on to make energy-saving improvements to the complex, which have saved them $80,000 on utility bills over the last two years