Many individuals find diesel engines to be entirely unacceptable due to the visible and invisible pollution they emit, not to mention the stench they leave behind in their exhaust trail. This all may be changing, however, due to the newest catalytic converters. Read the following report from AAAS.

RICHLAND, Wash. — The newest catalytic converters in diesel engines blast away a pollutant from combustion with the help of ammonia. Common in European cars, the engines exhaust harmless nitrogen and water. How they do this hasn’t been entirely clear. Now, new research shows that the catalyst attacks its target pollutant in an unusual way, providing insight into how to make the best catalytic converters. 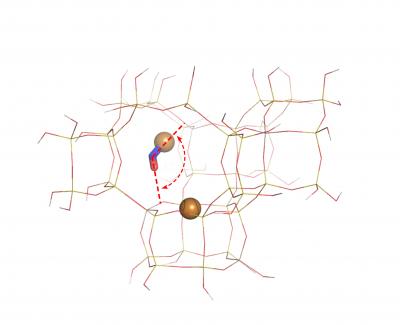 Reporting in the journal Angewandte Chemie International Edition, a team of researchers in the Janos Szanyi led by chemist Janos Szanyi showed that the artificial catalyst works much the same way that similar bacterial enzymes do: by coming at the target from the side rather than head on.

“What I find exciting is the correlation between this artificial catalysis and enzyme catalysis,” said Szanyi. “Nature is telling us what to do. Nature’s been at it for many millions of years, and it does this beautifully.”

Zeolites are crystalline alumino-silicate minerals that can accommodate metal ions — metal atoms with a slight charge — for catalytic applications. In some catalytic zeolites, the metal ions can break down the pollutant nitric oxide in vehicle emissions. However, the zeolites crumble and clog easily, leading to early failure. In addition, they produce as a byproduct the greenhouse gas nitrous oxide (known to dental patients everywhere as laughing gas).

Recently, researchers have produced a new zeolite that is surprisingly stable and makes very little nitrous oxide from nitric oxide, a chemical that depletes ozone. The zeolite produces mainly water and atmospheric nitrogen — the main component of air — but it needs to be fed ammonia, such as from urea.

Some of the diesel vehicles in Europe are now using this catalyst, and drivers must top off their urea tank as well as their diesel. Called Cu-SSZ-13, the zeolite uses copper as its added metal and has smaller spaces in its alumino-silicate scaffolding compared to other zeolites.

Researchers have assumed that this zeolite would break down nitric oxide in the same way that other zeolites do, following the same series of chemical reaction steps. However, something else must be going on because researchers can make the older zeolites work faster by adding nitrogen dioxide — but Cu-SSZ-13 doesn’t respond in the same way. This indicates Cu-SSZ-13 must be taking a different chemical route.

To explore how Cu-SSZ-13 breaks down nitric oxide, the team of researchers investigated the structure of the zeolite in the process of performing the reaction. Using tools designed to find such answers at EMSL, DOE’s Environmental Molecular Sciences Laboratory on PNNL’s campus, team members first looked at what molecules stuck to the surface of the zeolite.

There they unexpectedly found a charged nitric oxide molecule bound to the copper ions. This molecular combination could only happen one of two ways, the more common of which requires the presence of nitrogen dioxide. Because the researchers saw no nitrogen dioxide, they ruled out that common reaction pathway.

That left the copper metal itself directly hooking up with nitric oxide. In the process, copper borrows one of nitric oxide’s electrons, giving nitric oxide a charge. This early theft sets the stage for ammonia to react with the charged nitric oxide in the first of several chemical steps, ultimately pumping out atmospheric nitrogen and water.

Zooming in on the zeolite’s structure and reconstructing it with NWChem, software that models molecular chemistry, the team found something unusual. In most zeolite catalysts, nitric oxide is essentially a barbell combining a nitrogen atom and an oxygen atom. The barbell is bound to the metal atom on its head, most often at the nitrogen end of the molecule. However, in Cu-SSZ-13, the copper metal bonded with both the nitrogen and the oxygen halves of the nitric oxide barbell, as if the copper and nitric oxide formed a three-membered ring. Chemists refer to this orientation as “side-on”.

“The side-on complex is uncommon in this type of synthetic catalysis,” said Szanyi. “But bacteria have an enzyme called nitrite reductase that works this way. This enzyme breaks down nitrites into atmospheric nitrogen.”

The chemists also determined that the side-on angle causes the barbell to bend slightly. With no bend, the angle is 180 degrees, but positioned within the zeolite, the angle between the nitrogen and oxygen is about 146 degrees.

The computer reconstruction of Cu-SSZ-13 in action showed the spaces within the aluminum and silicon lattice can only hold one nitric oxide molecule. Other zeolites have almost twice as much space for the nitric oxide to move around.

“The small pore size just fits the reactants and provides precise control,” said Szanyi. “This reaction mechanism explains the prior studies — things like why we don’t get nitrous oxide.”

The researchers are continuing to explore whether this side-on intermediate is common in other catalyst materials and in other reactions.