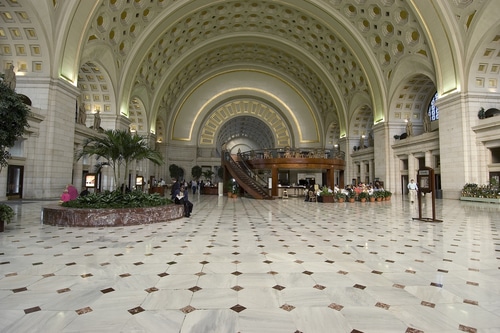 Union Station will transition to 100 percent wind power for its electricity load of 18,943,964 kilowatt hours annually. This is equivalent to avoiding the consumption of more than 1,400,000 gallons of gasoline or taking more than 2,700 cars off the road for one year. The world’s fastest-growing energy resource, wind power displaces conventional power, reduces carbon dioxide and helps eliminate air pollution.

“Reducing our environmental impact is a key priority for Union Station and using renewable wind energy greatly aids us in decreasing our carbon footprint,” said Roy Staeck, vice president of business development for Union Station. “As one of the most visited tourist destinations in the world, Union Station’s switch to wind energy through Washington Gas Energy Services is an important milestone in its history and a great opportunity to inform visitors about wind energy’s viability for businesses of all sizes.”

Union Station is hosting Earth Month 2013, a month-long event throughout April featuring interactive, eco-friendly experiences designed to raise awareness of environmental issues and encourage sustainability. Presented by Earth Day Network and the Premier Tourist and Landmark Association, this event will reach the more than 100,000 visitors who travel through Union Station’s doors each day. As an event sponsor, Washington Gas Energy Services will educate attendees about how they can reduce the environmental impact of their energy use through carbon offsets and wind power.

“With 37,000,000 visitors passing through its doors each year, Union Station sets an example to visitors, commuters and Washington, D.C. residents through its demonstrated commitment to environmental sustainability,” said Washington Gas Energy Services President, Harry Warren. “As a leading competitive energy supplier, we look forward to continuing to work with Union Station to lower the environmental impact of this landmark through renewable energy.