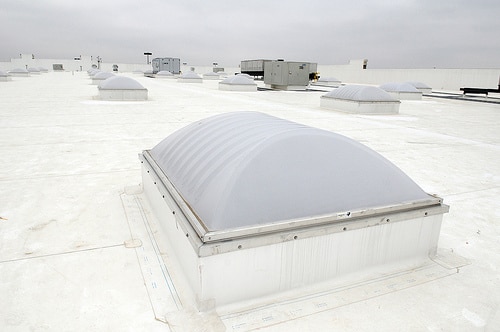 White roofs gain in popularity for their green impact

Yale e360 published today news that a New York City roof covered in a white synthetic membrane was on average 43 degrees F cooler than surrounding black tar and asphalt roofs during times of peak heat last summer. The news favoring white roofs is based on a study by scientists from Columbia University and NASA.

On the hottest day of the summer when the city set a record for electricity usage during a heat wave — the dark surfaces of some New York City roofs reached 170 degrees F, while temperatures on the white test roof peaked at less than 130 degrees F.

The city’s CoolRoofs initiative is working to install “living roofs” with plants and to convert many tar and asphalt roofs to a white color using membranes or white paint. The goal, the city says, is to help reduce the urban “heat island” effect, which can boost temperatures by 5 to 7 degrees F, especially at night.

Lowering the heat island effect would reduce demand for air conditioning and cut illnesses and deaths during heat waves. Converting roofs to white is cheaper than planting “living roofs,” and research showed said that the white membrane roof performed well over numerous years of the study.

“Bright is the new black,” said Stuart Gaffin, a Columbia research scientist and lead author of the study, published in Environmental Research Letters.

A Fundamental Understanding of Climate Issues & Solutions is Essential »