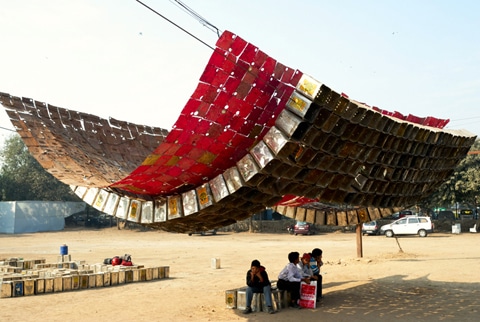 Currently the US is exploring and researching how other countries and communities maintain traditions and are working towards a sustainable future in development. The first exhibit in the US on contemporary Indian urbanism is the Jugaad Urbanism Exhibit at the Center for Architecture in New York City (AIANY).

Jugaad in Hindu is defined, in general, as a resourcefulness and innovation found in Indian cities. It is about making-do with the resources you have and how all cities can learn from Hindu Indian resourcefulness. The Indo-American Arts Council, Inc. says,

“Resourceful Strategies for Indian Cities explores how the energy of citizens “making do” can be an inspiration and a catalyst for the worldwide community of architects, designers, and urban planners.”

The Center for Architecture has partnered with the India China Institute at the New School, the Indo-American Arts Council and the Society of Indo-American Engineers & Architects to bring the Jugaad Urbanism Exhibit to our homeland. It is a non-traditional architecture exhibit because it is not based on high design or high technology but rather on designs that people have and can make to survive on their own.

The curator for this show is Kanu Agrawal. The show opened on February 10, 2011 and will be on display until May 21, 2011. It is free and open to the public daily. The exhibit is organized by current resource issues and divided into four categories: 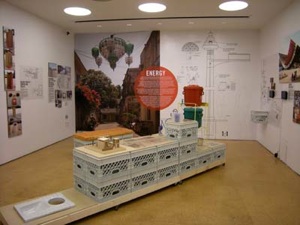 Works showcased in the Land category will be by Neera Adarka and Rupali Gupte for their proposal for the preservation and renovation of historic public housing, additional housing strategies, and a HUD Community Center that is planned for the ‘slum resettlement’ in Delhi.

In the Water resources section will be a commissioned project about toilets by Mueller Architects and water filtration systems by Tulip Water Foundation.

To educate and improve energy issues, the Energy area will be dedicated to solar alternatives and smokeless stoves. The final category of Transportation will display ideas and works for the skywalks of Mumbai, the bus transit, and the ‘typical Jugaad vehicle’ compared to traditional-modern vehicles.

Other related programs that are in addition to the Jugaad Urbanism Exhibit but occurring along with it are the Delhi-based artist group, Raqs Media Collective’s collection called, “Coordinates of an Everyday City” designed with the use of multi-medias and a film series, every Friday, during the exhibit, that demonstrates Indian life and resourcefulness of their culture.

Upcoming events of the Jugaad Urbanism Exhibit are:

While cities such as Delhi and Mumbai may seem worlds away, their abilities to use what they have and to strive for a more sustainable tomorrow can bring a new perspective to US cities and its inhabitants. Perhaps they, with shows like Jugaad Urbanism, will become the role-model in futuristic preservation and a more commonly practiced ‘jugaad’ lifestyle.

Exhibition and related programs are organized by the AIA New York Chapter in partnership with the Center for Architecture Foundation, the India China Institute at The New School, the Indo-American Arts Council (IAAC) and the Society for Indo-American Engineers and Architects (SIAEA). Jugaad Urbanism is supported in part by grants from the Graham Foundation for Advanced Studies in the Fine Arts and the National Endowment for the Arts.


« Scientists Create an Alternative Energy Biofuel from CO2 and Bacteria