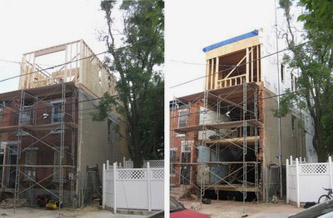 What does it look like to build a house with lots of green features? We see pictures of the finished buildings, and we read about the features that make them green. We know about the importance of good insulation and reducing electrical loads and choosing efficient equipment. But what does it look like while it all goes together?

Building Green on Montrose offers a wonderfully in-depth view into the process of constructing a green home. The project is the product of a couple of architects, Christopher & Emily Stromberg, working on the renovation of a rowhouse in south Philadelphia to turn it into a modern, efficient, green home. They are building this project as a speculative property, rather than a home for themselves, so it avoids some of the quirky indulgences that other green homes sometimes include. All of this has to make sense and be justifiable for an eventual buyer for the house.

It is also a wonderfully modest 1600 square feet, well below the average new construction house, yet it will have 3 bedrooms, a den, and 2-1/2 baths. They plan to have the house for sale on the market later this year.

The process is being extensively documented, and provides lots of pictures as they carry out each step of the project. They also have included some of the architectural drawings, to show what the plans and elevations for the building look like, as well as to illustrate how some of the sustainable design strategies for the house work. 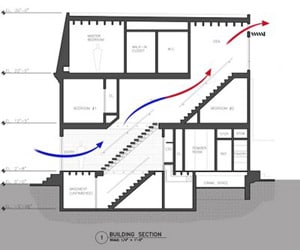 In addition to documenting the ongoing progress on the project, Building Green on Montrose also discusses materials choices and selections, including bamboo and tile for the floors, countertops, and insulation. They discuss why they like particular choices and what they don’t like about others, and they weigh the various factors in choosing which is the most appropriate selection. For example, they like Caesarstone and Icestone for their countertops. Caesarstone is imported, but the basic slab comes ina size that is well suited for their project and will mean that there is little waste. But on the other hand, Icestone has received a Cradle to Cradle™ certification.

In the most recent entry, they have met with the LEED for Homes raters and were pleasantly surprised to find that what they thought was going to be a LEED-H Gold project is actually on track for LEED-H Platinum.

The range of information covered in Building Green on Montrose gives people who aren’t regularly involved with building construction a great insight into guts of a green building and shows the work as it progresses.  It’s a great resource for both green builders and would-be green homeowners alike.

Other green homes articles on Green Building Elements:
The Costs of Not Building Green
Living Green in the 21st Century
Adventures in Windows, Part 1

also, The Possibility of a Residential Green Roof (added 1 August 2008)

images from: Building Green on Montrose


« “How Green Are You?” Contest Winners Announced