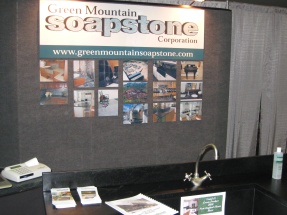 Let’s get right into it. As we walked into the immense PCBC exhibit halls both GE and Whirlpool proudly exhibited some of their Green appliances. Granted Whirlpool displayed what we would consider a green kitchen but Whirlpool only offers about 30 percent of Energy Star and other Green appliances. The percentage for GE remains even lower. We won’t even discuss GE’s overall environmental philosophy.

Being in the major appliance state of mind, we strolled over to Liebherr, makers of refrigerators and the first appliance company to remove CFC’s completely from the production process back in 1993. It’s no surprise to us that ALL of their models meet the Energy Star qualification, and their BioFresh compartments certainly add green value by preserving fruits and veggies (and the nutritional value) longer than normal fridges. The company also marked the first refrigeration company to comply with RoHS and also recovers and utilizes the energy released during production to heat the manufacturing environments. Yes, the company is based in Germany so hopefully US manufactures will chill with this philosophy.

Also on the old school route, Maze Nails only recently started promoting their “greeness” but they have been making nails with 96 percent recycled content (62% post consumer, 34% pre) for 160 years. Nails aren’t the most glamorous aspect of green building but we know that these guys hit the nail on the head.

We saved the best (or most outrageous) for last. Tucked away in the corner of PCBC we strolled past Green Mountain Soapstone and we probably would have kept right on strolling if not for placard sitting on their soapstone counter which proclaimed “Voted #1 Green Product 2008 New England Home Show”. We didn’t attend that show but if this product claimed the #1 prize then we would hate to see the #5 prize. First of all, this soapstone comes from the ground and last time we checked, the earth wasn’t producing more soapstone. Second, they mine it in Brazil (claiming they use fair labor practices) which isn’t exactly light on the carbon footprint scale. Need we continue? They claim it’s chemical free to manufacture and items such as Icestone aren’t (they should check that IceStone has Cradle to Cradle certification) but don’t insult us but claiming this soapstone to be a green product.

Excuse us while we polish our green granite counter tops.