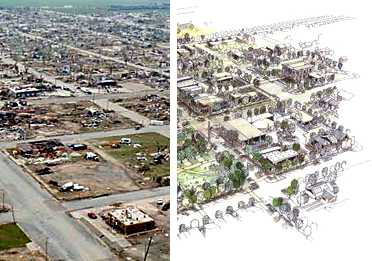 The city of Greensburg KS was nearly obliterated by an F5 tornado in May 2007. But turning the devestation into an opportunity, the city is looking to make its mark by rebuilding as a green community. The city has mandated that all city buildings larger than 4,000 sq. ft. must be built to LEED-Platinum level and must have an energy performance level at least 42% better than current building code requirements.

“The city of Greensburg has taken the extraordinary step of committing to rebuild their community to a new vision, not settling for simply recreating what had gone before,” said Rick Fedrizzi, President, CEO & Founding Chair, U.S. Green Building Council. “By committing to a recovery plan based on green building, the community’s leadership has set a path that will result in a healthier, more livable city for its citizens, turning a crisis into an opportunity that is an example for us all.”

After a disaster, it is difficult to take the time and effort to try to build something better than what had been present before. This mandate only applies to city buildings. But hopefully, the wider city itself will embrace this direction, and not only will city buildings, but the stores, offices, homes, and other buildings will likewise be built better, and greener, than what they are replacing.