This is the first of our Guest Posts through the Green Options network. Jason Phillip is a freelance writer and editor based in Chicago. He writes about the “green scene” in the Windy City for Sustainablog. 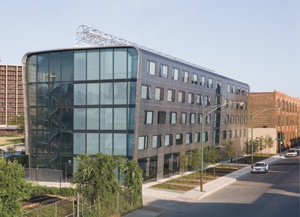 The urban fabric of Chicago is getting greener every year. Since 1989, more than 500,000 trees have been planted, more than 80 miles of landscaped medians constructed, and 2 million square feet of green roofs built or negotiated—more than all other American cities combined. But the more significant greening is happening in the built environment, where sustainable architecture is becoming a growing part of the skyline here in the birthplace of the skyscraper.

The push toward green building has been gaining momentum in the Windy City during the past few years. Chicago served as proud host to the 2007 GreenBuild Expo in November. The city already has the most LEED-certified buildings in the world. In the private sector, a number of large commercial projects underway will showcase some innovative design. One of the most dramatic of these is Santiago Calatrava’s Chicago Spire, a 2,000 foot twisting tower that will become the nation’s tallest building after completion in 2010. The commercial and residential tower will seek LEED Gold status based on many features including special glass to protect migrating birds.

Part of the reason green building is gaining momentum is a big push from City Hall. The administration of Mayor Richard Daley has mandated the use of green roofs and other sustainable design in all city-financed projects. While commercial developers gradually find their way to building more sustainable design as the real estate market develops demand, the city has been able to spread green building throughout the city by requiring all new public buildings to achieve LEED Silver status. In addition to the creation of green schools, green police stations, and green libraries, two buildings that opened their doors this year to some of Chicago’s poorest residents show that green design isn’t just for the well-heeled.

The Near North Apartments, located near the infamous Cabrini-Green housing project, is a single-room occupancy building with 96 units designed by internationally known modernist architect Helmut Jahn. The building’s green features include rooftop solar energy panels, cisterns to collect rainwater for on-site irrigation, and a gray water system that recirculates filtered water from showers and lavatories back into the toilet system. The Near North Apartments generates a portion of its own power through rooftop wind turbines that take advantage of the Windy City’s dependable breezes. The building sets new standards for sustainability and energy efficiency in the field of affordable housing.

The other green building with a social service mission completed this year is the new facility for the Pacific Garden Mission, Chicago’s oldest and largest homeless shelter. Another high-profile designer, renowned Chicago architect Stanley Tigerman, brought his talents to bear in an innovative, yet cost-effective building which opened its doors in October. The 989-bed facility sports a green roof as well as rooftop solar panels. An interior courtyard is planted with birch trees and contains greenhouses where residents will grow food served at the mission, gaining job skills in the process. The project is pursuing LEED Silver certification, mostly with typical off-the-shelf technologies and strategies. An example of this is the use of dual-flush valves on toilets to contribute toward water savings.

These two construction projects have drawn attention because the idea of innovative, eco-smart design seems at odds with most people’s conception of what a homeless shelter or public housing should look like. But when you think about it, non-profit agencies with limited budgets are just the type of organizations where the awareness of resource scarcity and the need for efficiency is understood on a basic level. What more receptive clients could you ask for when designing high-efficiency building that those who who don’t have resources to waste?

The city of Chicago deserve credit for working to hire some of the best architects around to push the envelope toward affordability in sustainable design. It’s great to see concrete examples that push green building out of the realms of the exotic and into the daily lives of those at the bottom of the economic scale. Thousands of Chicago’s most vulnerable citizens will benefit from these two projects because the financial burden of operating their high-efficiency temporary housing will be eased, freeing up more resources for things like job training and health care as they build better lives. Now that’s what I call sustainable.

This article originally appeared on Sustainablog.