Orbital Assembly Corporation (OAC) has newly released information on their Voyager Station project. It will be launched as the first commercially available of its kind, performing on artificial gravity and a hosting capacity of up to 400 people. OAC mentions this as a largely historic event, enabling humans to live outside of the Earth for longer periods of time in a way that is both sustainable and closely related to the functionality of life on the ground.  With near lunar gravity, OAC member Tim Alatorre states ‘’the function of normal toilets and showers,’’ enabling us to ‘’walk, run, jump in normal and yet unnatural ways.’’ 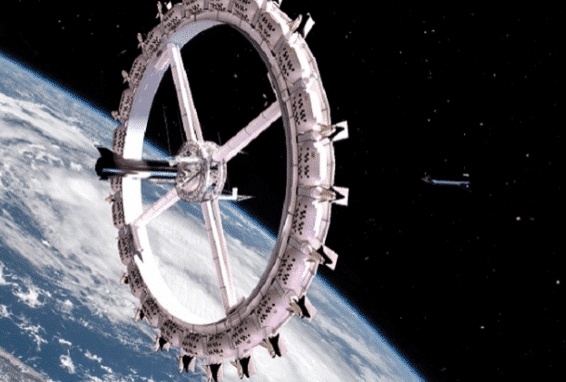 A team of highly appointed NASA veterans, pilots, architects and engineers is diligently working on the creation of a resourceful ‘’space hotel,’’ containing theme restaurants, music venues, theatres, viewing lounges, bars/restaurants, libraries, health clubs and spas. With 24 habitation modules, each 65 feet long and 40 feet wide (20x12m), the Voyager Station will also serve as a researching facility for international space agencies and private aerospace firms who are looking to discover more about artificial gravity and its relation to living and non-living environments.

How the complex is made? Fabrication & Assembly Manager Tim Clements clarifies the The D-Star project, or demonstrator structural truss assembly robot:

‘’This OAC’s first prototype is designed to create the structural backbone of future projects in space. This system has been engineered in house […] and consists of three loading magazines that house prefabricated trust sections and is transferred into an assembly area in order to make a fully assembled trust automatically.

This machine is currently undergoing commissioning and shipping before final demonstration in our facility in California. From there, we will record valuable data, lessons, land and innovation ideas before building a full-size version that will be loaded into a large vehicle fairing and launched into orbit,’’ Tim explains.

Weighing roughly eight tons in mass, the ring consists of steel, electric and mechanical components. By engineering the structure to be in constant spinning motion, the goal is to be able to produce stable levels of artificial gravity with a minimum of vibration or other unsought repercussions. This will demonstrate both orbit stabilisation and orbit maintenance.

As Chief Visionary Officer, Jeff Greenblatt mentions the progress as ‘’the first few stepping stones, paving the way to a solar system wide sustainable ecosystem, built by humans and operated in a way that is environmentally responsible.’’

Further into the interview, Gateway Foundation representative Tom Spilker, shows his admiring perspective stating that visitors can even ‘’put on space suits and go on spacewalks.’’ He says ‘’Imagine yourself in your suit, gazing out at the cosmos, with the helmet’s faceplate being the only thing between you and the universe. Wow!’’

Whether for research, governmental or commercial activities, the architecture is designed to be industrially revolutionary. Assembly is predicted to begin by 2025, marking the biggest human-made structure in space thus far.

Julia is originally from Brazil and is fluent in English, German, Portuguese and Spanish. She is a journalist and professional music producer.