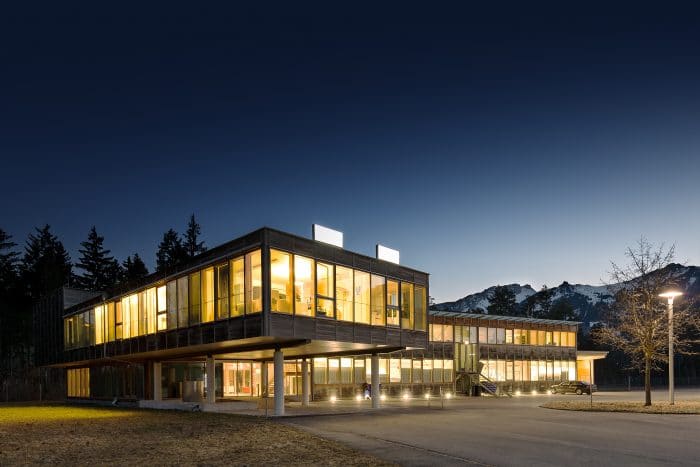 With more and more world leaders, educational institutes and industry professionals looking towards creating a more sustainable future for the next generation, many have focused on the housing crises and improving the consumption and production of energy.

One of these possible solutions is called ‘passive house’, and while the concept has been around since the late ’80s, it’s now beginning to gain traction and adoption by many top tier universities such as Cornell and Harvard.

Let’s take a look at what exactly a passive house is, and how it’s being utilised today.

Passive house or ‘Passivhaus’ as it’s popularly known in Europe, is the concept that your home or building should be as energy efficient as physically possible, and generally speaking, create as small of a footprint as can be achieved.

Sometimes this might mean things like ensuring your doors and windows are airtight or using solar panels for minimal heating which can lead to your building generating more energy than it uses.

But not all energy efficient structures can achieve passive house standards.

There are some strict rules that true passive houses will need to adhere to, which is why there are so few buildings with this status.

Bo Adamson and Dr Wolfgang Feist of the German Institute for Housing and the Environment had a conversation in 1988 which led to the concept of the passive house, through a series of research projects and temporary homes.

Their idea was simple in principle; develop homes that are ecologically conscious, and also cost-effective for owners too.

The first of these homes was built just two years later in Darmstadt, south-west Germany, which became the prototypes that helped develop the houses you can see today.

In 1996 Dr Feist founded the Passivhaus Institute, which would start to encourage countries around the world to adopt these successful standards, as well as the technology used within their structures.

Now, in 2019, this research has finally been adopted by many different universities and companies, who have launched their research projects as well as making sure their buildings can live up to these high standards.

So, what exactly does a building need to be truly Passivhaus?

While you can find a truly comprehensive list of requirements for a Passivhaus, here are some of the main criteria required to gain certification for your building:

You can use a passive house planning package for new buildings to ensure that they can meet all of these standards, and the strict building regulations required too.

In simple terms, your building needs to be as thermally efficient as possible, with airtight windows and doors and doesn’t waste any energy.

Recently, many universities such as ivy league colleges in America have started to adopt many of these Passivhaus values, and even incorporated the ideas into their research projects.

Not only are these universities becoming more eco-friendly and sustainable, but they will also find that using these regulations means that they end up making significant savings in regards to energy costs.

Being long-lasting and durable, using the Passivehaus planning packages could help you save for the future and make your building more attractive for buyers or investors.

The Wood Innovation Research Lab not only met but exceeded the passive house standard for energy efficiency in the middle of 2018, which makes it one of the only passive house buildings in North America.

The structure itself was designed to be industrial in appearance, made out of wood and engineered to be able to keep your building or home safe and warm even in the colder climates of Northern British Columbia.

Buildings such as the Wood Innovation Research Lab can sometimes use up to 90% less energy for heating and cooling than other traditional structures, and 70% less energy in total.

In fact, the efficiency of the building combined with biogas fuel means that the university is expected to produce one per cent of the greenhouse gas compared to typical structures.

With a substantial amount of insulation and the fact that the doors and windows are airtight, designers state that the building is not only energy efficient but also comfortable.

‘The House’ at Cornell Tech is known to be the world’s tallest passive house certified building, with 352 units that tower above Roosevelt Island at 26 stories high.

Although the aesthetic design has been criticised by experts, no one can dismiss the fantastic achievements that this building has attained – significantly, passive house status as well as LEED platinum certification.

This building is being used as affordable graduate housing, with sealed windows and doors, preservation of indoor temperatures, highly insulated walls and triple paned windows.

Many universities such as Cornell are now leading the way as examples of eco-conscious living.

The Harvard Center for Green Buildings and Cities at Harvard Graduate School of Design has recently revealed the completion of their ‘HouseZero’, which is a conversion of a 1920’s home that doesn’t require any energy for climate control, daytime lighting, energy or carbon emissions.

Not only will it generate more energy than it will ever use, but the designers have also installed embedded sensors that will collect data about how the home is performing.

This will then help to further the research that goes into how to make future homes, even more, energy efficient and comfortable, as well as cost-effective.

These ‘smart homes’ are a natural progression when it comes to eco-friendly architecture.

The University of Aberdeen has built a pre-school childcare facility which was constructed to help answer a simple problem regarding a lack of space for staff and children.

During this process, the University of Aberdeen tackled many different problems that those wanting to build a passive house building have to consider, such as; lack of passive house quality suppliers and experience.

Not only did the university successfully manoeuver these problems but they also used solar gain for heat as well as heat pumps for a secure building temperature.

As the ideals of a passive house are embraced by more leaders in the industry, homes and commercial buildings will become much more cost-effective, and attractive to buyers.