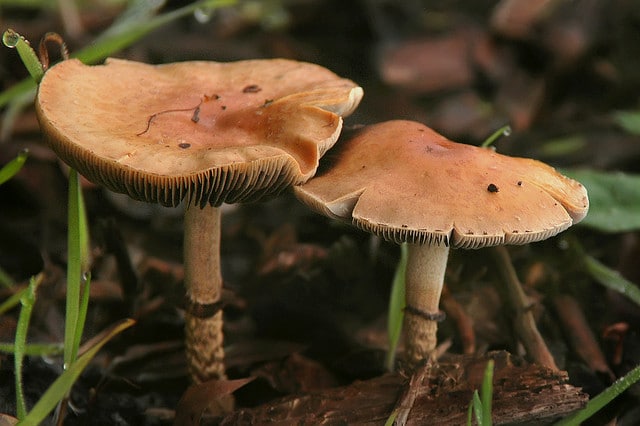 Mycoremediation, the use of fungi to treat water and soil, could be the stormwater filter of the present and future.  A couple of projects in Portland, Oregon are putting the science to the test.

According to Wikipedia, “one of the primary roles of fungi in the ecosystem is decomposition, which is performed by the mycelium. The mycelium secretes extracellular enzymes and acids that break down lignin and cellulose, the two main building blocks of plant fiber… The key to mycoremediation is determining the right fungal species to target a specific pollutant. Certain strains have been reported to successfully degrade the nerve gases VX and sarin.”

The speed at which the mushrooms break down materials is dependent on the molecular simplicity of the substance, the temperature, and the acidity of the environment.  Generally fungi prefer warmer temperatures and a slightly acidic environment (pH of 4-5).  In addition, the presence of oxygen is essential for the initial stages of degradation.

Mushrooms sprouting from the planters designed to catch runoff as it flows off the Siskiyou Square site in Portland, near the intersection of Northeast 85th Avenue and Siskiyou Street, are no accident. Members of the Dharma Rain Zen Center, a Buddhist organization, planted them to test these theories.  They are hoping to treat urban stormwater, removing potential pollutants such as heavy metals, hydrocarbons from vehicle fuel, and E coli and other bacteria.

The planters are being used to treat the contaminants of the 14-acre brownfield site, which used to be a rock quarry and construction landfill.  It is hoped that test results will show that the mushrooms are having an effect on the cleanliness of the storm runoff.  While mycoremediation has been around for a long time, there isn’t much empirical data to show that it actually works.  The EPA has backed the project with a $200,000 grant.

Clean Water Services in Washington County is using mushrooms in another experiment to treat the waste water from street cleaning machines, removing the hydrocarbons from motor fuel.  The results of the 90 day trial will be available later this summer.  CWS hopes to use the mushroom-cleaned debris (mostly containing leaves and other natural debris) as a soil amendment for agriculture, saving the expense of disposing of the currently toxic remains.

Mary Vogel, principal of Portland-based sustainable urban design and planning firm PlanGreen, has long had an interest in mycoremediation and was happy to hear that it’s being incorporated in the Zen center brownfield cleanup. She’s hopeful that the technique will finally start to take off in the Portland-metro area.

“I’ve been waiting 30 years for mycoremediation to take hold in this community,” Vogel said. “It seemed like a no-brainer … We’re one of the leaders in stormwater (and) bioremediation, but we’re not using mushrooms.”