If you don’t live in Toronto or are not familiar with the city’s latest developments, then there’s something you should know: the city’s downtown core is changing, and rapidly so. 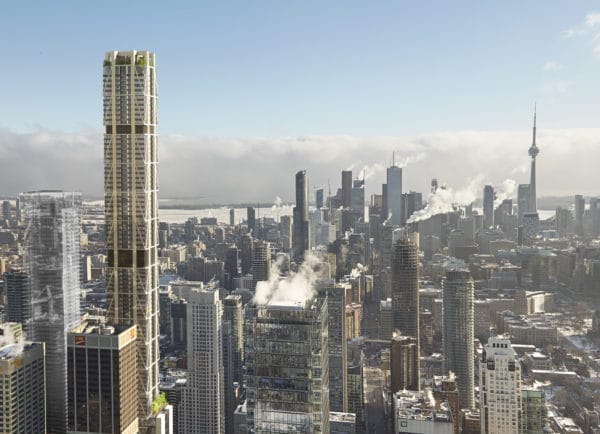 In October this year, The Toronto Star published an article describing towers in various phases of development in downtown Toronto and how this new generation of developments will transform the city’s skyline over the next ten years.  Ten new skyscrapers, three of them designated “supertall” buildings at 300 meters tall or more, and one development – the front runner of the group – boasting a $1 billion construction project.

This front runner is “The One”, an unprecedented 80 storey condominium tower being developed by real estate executive Sam Mizrahi, President and founder of Mizrahi Developments.  Located at the iconic southwest corner of Yonge and Bloor Streets in downtown Toronto, The One will be situated in one of the most sought-after real estate locations in Canada.  It’s a location central to Toronto’s history and identity, with roughly 400,000 subway riders and a 24-hour pedestrian traffic of more than 50,000 passing through the intersection at Yonge and Bloor every day.

Building sustainable buildings involves more than simply concentrating on the environment.  It also means creating structures that give residents a sense of comfort and belonging.  And it means that the structures themselves should meet the demands of their surroundings.

Sam Mizrahi envisions The One as a “sanctuary in the skies”.  Designed by innovative architectural firm Foster + Partners, a firm that is no stranger to sustainable architecture, when built, The One will not only be the tallest residential tower in Canada, it will feature an iconic design appropriate for its central location in Toronto.

With a pioneering exoskeleton design, the first 8 storeys of The One will be an eight-level luxury shopping mall that will serve as a foundation for more than 400 luxury condominiums above.  With structural supports on the building’s exterior, The One will allow for an interior with maximum sunlight and free of pillars, thereby providing the highest degree of design flexibility for retailers.

Sam Mizrahi calls this design element, “uncontaminated space”, adding, “This is for global retailers who haven’t been able to bring their vision to Toronto because the space they need doesn’t exist.”

A History of Green Building

Constructing landmark buildings that are forward-thinking while still retaining classical architectural elements is not new for Mizrahi Developments.  The firm was founded in 2008 by Sam Mizrahi to realize an ambition of introducing quality, craftsmanship and a classical sense of permanence to luxury homes, qualities that Mizrahi thought were lacking in Toronto real estate development.

Over the next several years, Mizrahi built luxury homes in some of the most valuable neighborhoods in the Greater Toronto Area, with Mizrahi Developments becoming known for its attention to detail, old world sensibility and for building luxury homes that were refined and highly customized to meet the comforts of its future residents.

While doing so, Mizrahi was also proud to have Mizrahi Developments be the only Canadian builder to earn ISO 9001 certification, a strict quality of management system overseen by a Swiss regulatory body.  What’s more, Mizrahi was proud when his company acquired several notable environmental credentials. Committed to including Energy Star technology in its developments, Mizrahi Developments’ environmentally-responsible construction practices and values even earned it GreenHouse Certification.

Which brings us back to the development of The One, Mizrahi’s largest and most iconic development to date.

The iconic 80-storey structure that will be The One is designed with livability and well-being in mind. From the customizable, sound proof units that allow residents to make their space unique to the public atrium nestled above the retail and restaurant space that will serve as a community hub, Sam Mizrahi wants The One to be an oasis and an escape from the hustle and frenetic pace of the Yonge and Bloor corridor.

The sheer height and open design concept that sets The One apart from other luxury condominiums allows the building to offer unobstructed views of Lake Ontario and the Toronto skyline. Instead of traditional balconies and solariums, The One will feature Winter Gardens, semi-enclosed spaces that allow residents to enjoy natural light and the full beauty of all four seasons.

Designing with Surroundings in Mind

As mentioned, the location of The One at the intersection of Yonge and Bloor Streets is one of the busiest, most central locations in Toronto.  Not only does it serve as the stopping point for two major subway lines in the city, it’s a destination that’s becoming increasingly popular for Toronto’s tourists.  The intersection also happens to be one of the more desirable locations for international retailers.

Underscoring the significance of the intersection, Mizrahi describes it this way, “I’d say it’s the most coveted retail site in Canada … It’s really the nexus of Toronto in terms of density and retail.”

What that means is that any new building proposed at such a significant intersection should not only have a landmark presence, it should also take steps to accommodate its surroundings while considering the needs of heavy pedestrian and commuter traffic.

The One’s design plans will meet those needs.  Downtown Toronto has a heavily-used PATH system of underground pedestrian tunnels.  The One will conveniently connect to the PATH system, while also connecting to the major Bloor-Yonge subway station.

Aside from meeting the needs of Toronto’s pedestrians and subway commuters, The One will also feature a public lobby and one particularly impressive green design element: a 40 meter high public atrium that promises to give residents comfortable space both within and outside of the building.

For Sam Mizrahi and his design team at Foster + Partners, creating an impressive and accessible exterior was an important element to the overall design.  They achieved this by recessing the building back from Yonge Street, thereby opening up the corridor for more foot traffic. The sidewalk on the eastern side of the building will also be expanded to create a more pedestrian-friendly thoroughfare, as well as an open air public piazza, reminiscent of the renowned Rockefeller Centre in New York City.

In September, plans for The One received a green light from Toronto city council.  When complete, The One will be Toronto’s tallest residential skyscraper and the 12th tallest in the world.

This post is sponsored by Dan Rogers; images from The One, used with permission