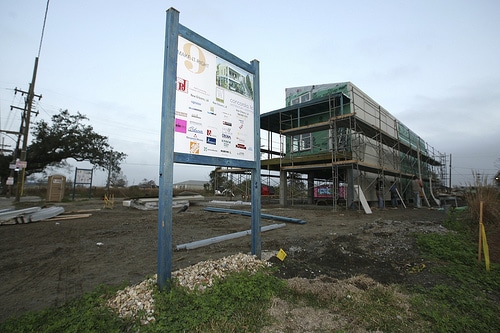 It has been five years since Hurricane Katrina swept through New Orleans, and many parts of the city are still waiting to be rebuilt. Thanks to the Make It Right Foundation, much of the rebuilding will focus on green and sustainable technologies. Home owners still coming back to the infamous 9th Ward will get to be part of a new sustainable community.

What is the “Make It Right Foundation”?

The brainchild of actor Brad Pitt, the “Make It Right Foundation” is an organization created to help rebuild the devastated 9th Ward in New Orleans. By focusing on green and sustainable building practices, the members hope to create a sustainable community that residents can be proud of.

The foundation began in 2006 as a group of 13 architecture firms hired by Pitt to design affordable, eco-friendly houses for New Orleans residents. So far, Pitt and the “Make It Right Foundation” have begun building homes on the exact spot where the Industrial Canal levee breached on Aug. 29, 2005. The goal is to have 150 homes built by December, 2010. For the residents of New Orleans, the project provides a way to return home.

Many of the homeowners shared their stories about “Make It Right”. One resident, Ann Parfaite said:

“This project affords residents in the Lower 9th Ward the opportunity to return to their neighborhood under better conditions than they were prior to the hurricane. I am very happy to be able to participate in the Make It Right program and to be restored to my home in the Lower 9th Ward,” said Parfaite

All of the homes built so far in the 9th Ward have been certified as LEED platinum for their energy efficiency and sustainability. According to “Make It Right” and the U.S. Green Building Council, the area is now the “largest, greenest neighborhood of single family homes in America.”

As rebuilding continues in New Orleans, other parts of the city are also working to become greener. The The Grand Bay Coastal Resources Center recently became the first Mississippi’s state government-owned building to be LEED certified. Soon, New Orleans could become the most sustainable city in America.