The 2008 Olympic Games in Beijing are supposed to be the greenest yet. There has been some coverage on television, and despite all the attempts to clean things up beforehand and to limit especially the air pollution during the games, pictures from the city show it still in many ways to be a smoggy, grimy place. It’s not wholly bad, however. The buildings constructed for some of the competitions are architecturally striking, and they seem to be a functional success, as well. But how do they stack up as green buildings?

There has been some criticism that outsider firms were chosen to design these iconic buildings, but the successful execution of both projects undermines this criticism somewhat. Swiss architectural firm Herzog & de Meuron were the lead designers for the Beijing National Stadium (Bird’s Nest) and the Australian firm PTW Architects were the design lead for the Beijing National Aquatics Center (Water Cube).

The Bird’s Nest Stadium is described as functionally being eight separate buildings. “Since all of the facilities – restaurants, suites, shops and restrooms – are all self-contained units, it is possible to do largely without a solid, enclosed facade. This allows natural ventilation of the stadium, which is the most important aspect of the stadium’s sustainable design.”

Engineering firm Arup served as consultants for both the Bird’s Nest and the Water Cube, but only for the Water Cube do they speak about working to ensure the sustainability of its design. “Swimming centres require a lot of heating, but by cladding the building in high-tech ETFE cushions, we have developed a very efficient green house. 90% of the solar energy falling on the building is trapped within the structural zone and is used to heat the pools and the interior area,” says Kenneth Ma of Arup. 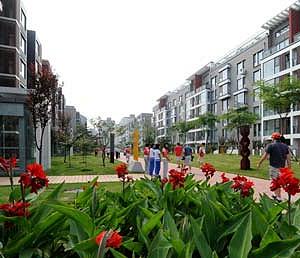 The Olympic Village, where the athletes are housed, is less of a signature project than the stadiums, but is, perhaps the more impressive green building feat. The Olympic Village was awarded LEED Gold with the plaque presented by US Treasury Secretary Henry Paulsen this past Wednesday. Green features of the building include solar cells and geothermal heat pumps.

“Through a heat exchange system, the Village is projected to draw 7.89 million kilowatt hours of renewable energy from the Sun during the Olympics and slightly less in the years after the Games are finished and the buildings are used to house other residents.”