As manufacturing costs of solar panels and equipment have decreased, many hotels are investing in the realization that patrons are more likely to visit and return to a hotel that is more green. Hotels around the world are mounting solar arrays in order to improve the natural habitat of humanity while saving money on energy expenses. Since many states and organizations are putting forth an effort for increased sustainability by 2020, it seems that everyone is trying to help out. 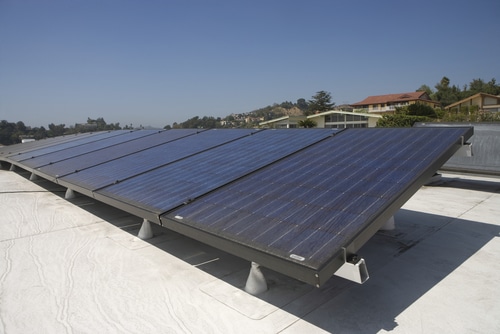 1. Starwood Hotels & Resorts Worldwide – In May of 2013, Starwood Hotels & Resorts Worldwide stated that it will be partnering up with NRG Energy, Inc. to install solar arrays on a number of the hotel chain’s establishments. Combined in the package from NRG, a 1.3-megawatt solar array will be installed at the Westin St. John located in the U.S. Virgin Islands. The amount of power generated by this array is enough to cover the utility bills of roughly 260 average homes. Considering the amount of power that the average hotel consumes, an array of this magnitude could save the surrounding community a great deal of power. The commitment provided by NRG is to help Starwood reduce its global power consumption by 30 percent by 2020.

2. Hotel Verde – As it is being dubbed as Africa’s greenest hotel, the Hotel Verde can be viewed as a trend setter in the field of creating a green environment for the community. The location’s large solar arrays are to provide power to the establishment as well as shade to the patrons who visit from the scorching heat of the Sun. Featuring a grey water recycling system, the hotel could reduce its potable water use by 75-percent. This is on top of the other initiatives that the hotel offers to guests such as credits towards hotel features and bar in lieu of using air conditioning in the room and/or using towels more than once.

3. Bayfront Park, Miami – Although this off-shore attraction is still in its proposal stages, there is much to marvel at the concept of this half-sphere wonder. The proposal by Vision division is to create a sun-like hotel that will essentially illuminate itself through the use of its array of solar panels. It is to be a self-sustaining structure and the excess energy provided from the array will give the hotel a glow that can be seen from the beach to simulate a sunrise or sunset during specific times of the day. It would feature a water park, casino, and various observation decks that can be used to overlook the Atlantic Ocean. Although the idea does have its glamor tailored for the “Sunshine State” by bringing elements of the Caribbean to Miami, there may be a few skeptics on-shore who don’t relish in the idea of half of an orange sphere being seen seemingly floating in the ocean.

With every kilowatt hour that is generated in solar power from a home or business, that is one less kilowatt hour worth of resources that power plants don’t have to absorb. It’s not just the coal or oil that is fed into these steam turbines to generate power. Also consider the shipping fuels of these materials in freight trains and semi-trucks. There is more to the carbon footprint to power plants than just the materials they burn.

Author Bio: Ken Myers is the founder of  http://www.longhornleads.com/ & has learned over the years the importance of focusing on what the customer is looking for and literally serving it to them. He doesn’t try to create a need, instead he tries to satisfy the existing demand for information on products and services.