Green technologies are becoming more and more popular in all aspects of home and industry design. As New York rebuilds after the tragic events of 911, a new era of architecture is being unleashed. 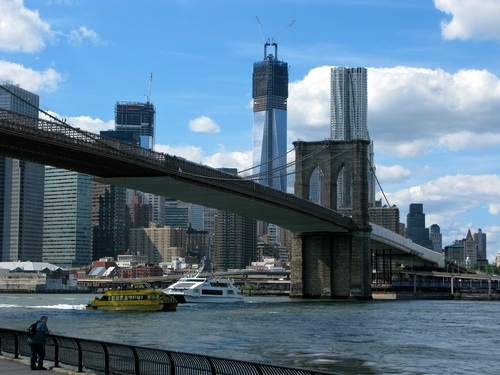 The New Freedom Tower is the building being erected at the site of the former One World Trade Center. It is being built with great technological advancements including those that are positive for the environment. Here are a few examples of green technologies that are being utilized.

It takes a great amount of paint to cover the walls of a large building like the new Freedom Tower. Contractors of new structure are using low VOC paint as a standard throughout the various floors. VOCs, or volatile organic compounds, are harmful chemicals that are included in most paint. They are toxins that have been linked to cancer and are known to do damage to the environment. As they vaporize, they produce ozone. When normal paint dries, VOCs are emitted at high levels and spread into the air following application. To eliminate these environmental problems, the builders of The New Freedom Tower have chosen to use low VOC paint on all walls. Along with this, half of the wood being used in the structure has been taken from forests that are FSC certified sustainable harvest. This means that forests that normally become depleted due to construction were not placed in harm’s way.

Large structures take a great deal of electricity to run, which turns into a great expense both monetarily and environmentally. To avoid these expenses, half of the energy used in the building is derived from renewable sources like wind power. This is a key aspect for achieving LEED certification. Engineers have designed a wind farm that will be located over the observation deck. It will be able to produce 2.6 million kilowatt hours of electricity each year.  There will also be solar panels placed in the observation deck as well. Despite the complaints that this will detract from the appearance of the building, it will serve as an asset to the structure and the city.

The exterior design of The Freedom Tower is not the only part of the building that is concerned with green technologies. There are many additions inside of the building that are trying to save energy and help the Earth as well. To conserve energy, the building is using glass to block out UV rays that create heat while welcoming natural light in at the same time. The building’s lobby will include a natural means of ventilation. This will lower the amount of electricity being used. Appliances and lighting in the structure are both energy efficient systems as well. All of these efforts are trying to create a building that is carbon negative and actually gives back energy into the grid instead of draining it.

There are also efforts being done to gather water that has fallen in the form of rain and turn it into a usable source of water inside of the structure.  This recycled water can be supplied and used throughout the building.  For example, the building can use the water in the cooling system or for watering the park area. The cooling tower can use the recycled water to transfer away heat that is produced from all of the electronics and people in the building. To conserve water, contractors are installing efficient plumbing for bathrooms and other facilities that lowers water use as well.

Besides the actual building structure, tenants and workers of the New Freedom Tower will be given incentives to commute on bicycle or carpool. There will possibly be preferred parking offered to hybrid vehicles or other fuel-efficient cars. This extends the vision of having a total eco-friendly environment.

There are many ways to incorporate green technologies into a new building of any size. This will make it a friendly addition to the planet. The New Freedom Tower of New York City has used many of these features to become one of the largest structures to take advantage of renewable sources of energy as well other environmentally friendly practices. Hopefully this will be an incentive to future architects to create plans for a cleaner Earth.

Author Bio: William Stevens is a writer who focuses on the field of engineering. This article was written to describe a few of the green technologies surrounding this new building and to encourage further study in this area with a Masters in Engineering Management Online.