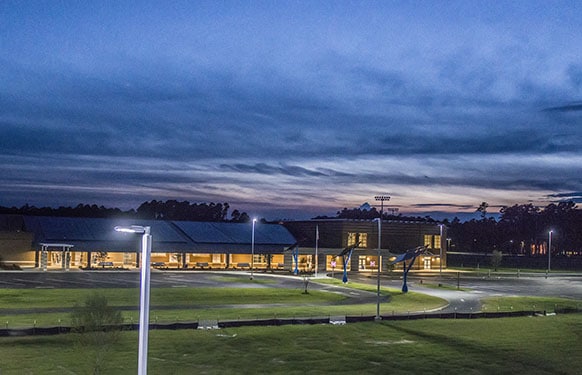 Sandy Grove Middle School in Lumber Bridge, North Carolina is the first leased public school building in the United States designed to be LEED Platinum certified. Developed by Firstfloor and sister company SfL+a Architects, Sandy Grove is a public/private partnership and the first energy positive school in the nation to be financed out of its own expected energy savings and then leased to the school system. The building is projected to save the county $16 million on its energy bills over the life of the building.

Students not only get an education in the Science, Technology, Engineering and Math subjects at this STEM school. They also attend classes in their very own environmental laboratory and learn first-hand the benefits of a new concept in sustainability for educational institutions — a net-positive school building that produces more energy than it consumes. The school even has a working energy dashboard that tracks the performance of the facility’s green elements, enabling teachers to use the building itself as a teaching tool.

“Being from a high-growth, low-wealth county, it was critical for Hoke County Schools to approach the construction process of our newest school in a way that would be speedy, efficient and cost-effective,” says Dr. Freddie Williamson, principal of Hoke County Schools.

Part of the energy savings so critical to the public/private partnership are the LED lighting fixtures provided by Cree.  The Sandy Grove project was designed for maximum energy efficiency with one of the key components being the use of high-efficiency LED lighting. However, LED wasn’t the initial vision for the lighting solution. As Barry Buckman, principal with SfL+a, explains, “The project was originally designed around traditional fluorescents.”

But a chance introduction to Cree — one of the industry leaders in LED lighting technology — led SfL+a down a path they’re now following with all other projects. The designers switched to Cree for all the school’s overhead and outdoor lighting fixtures.

“Energy savings are important and Cree did a really good job of taking our lighting design and doing an energy analysis with Cree fixtures to show what the savings can be,” says Buckman. “Now, moving forward, we’re using LED lighting as the standard of design. The next couple of schools we’re working on actually have 100 percent LED, allowing us to maximize that conservation aspect of each project.”

According to Cree, this is the beginning of net positive institutions using LED lighting technology. A worldwide shift to energy efficient lighting would lower electricity demand by more than 1,000 terawatt-hours and reduce CO2 emissions by 530 million tons annually. Decreased energy needed to power the same light output, without adding additional heat, benefits other systems, such as HVAC.

“On a recent visit,” Buckman says, “one little girl jumped up and started going through the energy dashboard, actually pulling up all the different usages. It was a really exciting, powerful moment to see the kids actively breaking the information down in a way that showed they understood it. It’s a great teaching tool — a way of making these technologies and the reasons behind them accessible to a lot of different age groups.” A great lesson plan, well taught. 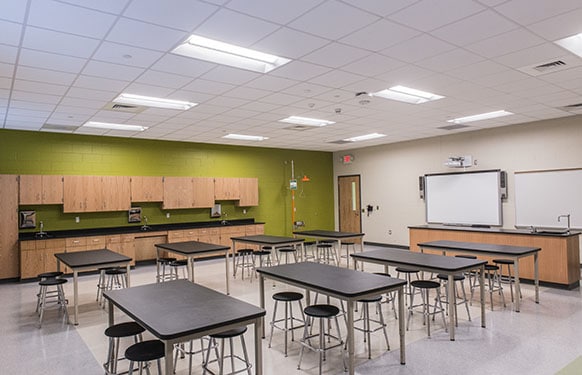