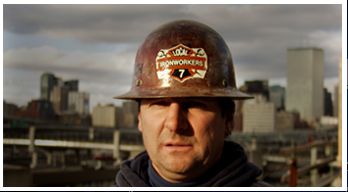 On Tuesday, April 22, the Sundance Channel will present as part of their The Green series “The Greening of Southie,” a documentary on the construction of Boston’s first green residential building, the Macallan, which is seeking a LEED gold rating. If the idea of watching a documentary on the construction of a condo building doesn’t sound too exciting to you, I cannot recommend this film enough to anyone who is or wants to be a part of green building. It presents the challenges and excitement of building green with equal measures of idealism and cynicism, juxtaposing the suits who see the project as ideas and paper with the laborers who actually have to put the building together. As the project grows, the two come closer to understanding the other side.

Fittingly, the film begins with a group of incredulous workers in hard hats listening to a project manager describe what a green building is. It turns out he doesn’t exactly know himself. “What does it give you?,” “what’s the point?” they ask. “I can’t answer that exactly,” he responds. But the skeptical laborers make jokes, dismissing the whole idea. After the manager explains that the condos will have “double flush” toilets, one man jokes, “I use that a lot – that system. One never seems to do the job.”

The film makers succeed by not explaining to us what green building is. Instead, they ask different people involved with the project to explain it, resulting in wildly different accounts of what it means to be green. One will focus on the location of the project, across the street from public transportation. One will speak of the regional materials used on the project. Another believes that everything in the building is made from recycled materials (not true – though many renewable materials were used and 90% of material hauled off the site will be recycled.) When asked why a tree was being taken up to the roof, one man guessed, “for good luck?”

What comes across quite clear in the film is the disdain many people involved, including the project owner/developer, have for greenies. Laborers huff about what a waste of time and money building green is. The owner/developer says that the building is not green in the sense of “eating simple cheeses or eating plain meats or something weird like that,” a comment that I had to rewind to make sure I heard correctly. A member of the waste management team says “I viewed green as dorky,” but then by the end of the project has a tattoo of a roll-off truck on her “bum,” which she shows off. I didn’t rewind that one.

The true star of the film is Wayne Phillips, a laborer who at first is skeptical but intrigued. But as he tries to explain his work with the Macallan building to his children he can’t hide his pride, and when his daughter continues to show interest in it – even asking if they can buy a condo there, he responds with a comment more profound than he intended: “I always tell you a good education will get you anything you want in life.” Green building, it seems, is viewed as a luxury for the wealthy, and even the local bar owner fears that buildings like the Macallan will price him and others (and perhaps the south Boston culture) out of the neighborhood. The class conflict in the film is subtle but well done.

The film shows the green successes of the building, rainwater collection tanks, FSC wood decking, energy saving windows, to name a few, as well as the failures. The bamboo flooring buckled, perhaps due to the new VOC free glues, and 72 floors had to be ripped up and replaced. The wheatboard cabinets swelled, causing installation headaches, but none, it seemed, had to be replaced. The green roof represented the largest disconnect between idea and installation, as every slow step had to be done by hand. The installers didn’t hold back their displeasure. And then all the plants died.

By the end, many of those working on the building come around to the advantages of green building, and even the man who joked earlier about “double flush” toilets argues the merits of green building. Others say that they will tell their grandchildren one day that they built the first green building in Boston. Mr. Phillips takes his daughter on a tour of the completed building. She says it makes her want to join a club at school on being green.

“The Greening of Southie” will air at 9:30 eastern and pacific.