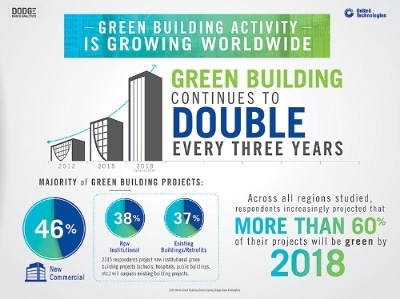 According to a recent report, soon to be released by Dodge Data & Analytics, green building continues to double every three years, with strongest acceleration in emerging economies, and clients and tenants worldwide are increasingly demanding sustainability – for both energy efficiency and occupant benefit.

The new report surveyed more than 1,000 architects, engineers, contractors, owners, specialists and consultants in 69 countries to understand their current green building project involvement and expectations for 2018. In addition to expanding the sample size by more than 25 percent over the 2012 study, the new report also has a higher percentage of architect and contractor participation across a larger number of countries.

The findings, which will be fully available in early 2016, reaffirm 2008 and 2012 research that green building is doubling every three years and introduce new trends, the latest drivers and barriers for green building.

The survey also examined potential barriers to green building development. Among the findings, half of survey respondents noted higher perceived costs as the top barrier to green building, a notable decline from 80 percent of respondents in 2008 and 76 percent in 2012. Other barriers differ by country. Developing countries regard lack of public awareness and lack of political support as a key barrier, while in the U.K., the perception that green is for high-end projects only was cited.

“There is some work to do, but this data shows the benefits of green buildings are real. Roughly 70 percent of survey respondents cite lower operating costs as the greatest benefit – and these results provide a roadmap to continue growing this important segment,” added McDonough. “It becomes a cycle as building owners seek to create healthy, energy-efficient and productive environments – as a selling point to tenants.”