Architect Michael Green of Vancouver is a strong advocate for using engineered wood products like cross laminated timber (CLT) to construct medium to high rise buildings.  His mantra is “The Earth grows our food. The earth can grow our homes. It’s an ethical change that we have to go through.” He says wood sequesters carbon dioxide from the atmosphere – about 1 ton of CO2 per cubic meter – and holds it captive during its entire lifetime, even when used as a building material.

His signature building is the Wood Innovation Design Centre (WIDC), shown in the video above, in Prince George, British Columbia which is 6 storeys high, but he has completed plans for a 30 storey office building made entirely of renewable wood, which he calls a “plyscraper.”

In New Zealand, CLT is touted as a “desirable and safe alternative” to concrete and steel in earthquake zones because it’s lighter and more flexible. Using a technique known as “post-tension technology”, steel tendons act like rubber bands to snap a wooden building back into place after any seismic event.

CLT is also as fireproof as steel or concrete. In a fire, the outside forms a non-flammable  layer of char that insulates the interior of the wood panel from heat.

Giant Australian contractor Lend Lease has built an 8 storey apartment building using CLT at Victoria Harbor in Melbourne. Its designer, architect Alex de Rijke, says “the 18th century was about brick, the 19th about steel, the 20th about concrete, and the 21st century is about wood.” According to Lend Lease, they were able to construct the building 30% faster than traditional construction, had less construction traffic, caused less disruption, and generated less waste. Check out the developer’s interactive website detailing all the green features of the building.

New ideas in building technology are slow to take hold. Changes in national and local building codes are needed before new techniques can be approved. Often, politics plays as big a role as any other factor. For instance, the concrete industry is outraged that the British Columbia government promotes wood construction and actually passed legislation that requires “the use of wood as the primary building material in all new provincially funded buildings”.

But now that the word is out about CLT and other timber products, look for a “plyscraper” in your neighborhood soon. 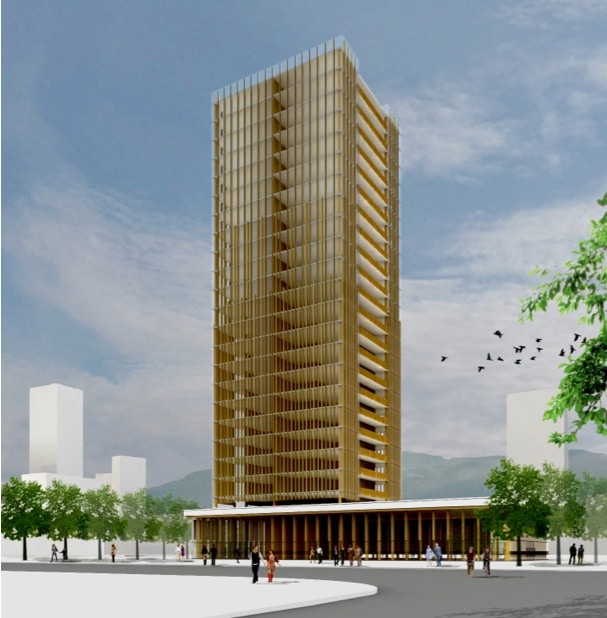