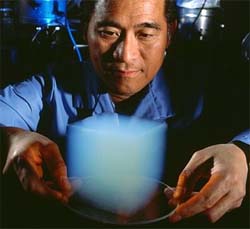 Aerogel is almost a product out of science fiction.

Nicknamed “frozen smoke,” aerogel is extremely lightweight material, with a density only 3 times that of air. Only a small fraction of a volume of aerogel is the material itself. Most of the volume is filled with air. This makes aerogel an excellent insulator. (Aerogel provides nearly 40 times the insulation of fiberglass insulation.)

Aerogel can withstand great pressures and is also an excellent sound insulator. Aerogels can also be used to absorb airborne pollutants and have been used to clean up oil spills. NASA also used a section of aerogel as part of its Stardust probe to collect samples of material from the tail of a comet.

Aerogel is available for some high-performance applications, but due to its high cost, it has not been widely used. However, new research from a Malaysian scientist offers the potential to drastically reduce the cost of producing aerogel, and could lead to new possibilities for its use as a building and insulation material.

Dr. Halimaton Hamdan from the Universiti Teknologi in Malaysia has developed a method of producing aerogel that could reduce the cost of producing aerogel by 80% by using agricultural waste from rice husks as the feedstock. Rice husks evidently have a high silica content, and silica is the main constituent of aerogel. In addition to potentially being able to produce aerogel for one-fifth the current cost, this also addresses a problem with disposing of rice husk waste.

Because aerogel is translucent, rather than completely transparent, one of the places it has first been used in architectural applications has been in daylighting panels. Commercial applications of aerogel are from companies such as Kalwall and Advanced Glazings, both of which produce diffuse lighting windows that incorporate aerogel to produce panels that transmit light while having an insulation R-value equal or better than that in an insulated wall in a new home. These windows aren’t for vision, but they allow a high percentage of light to be transmitted, allowing for diffused daylighting, which is a better method for lighting without producing unnecessary glare. However, until now, these windows have been used only in special instances because of their high cost.

If prices for aerogel become significantly lower, it should be possible to see highly insulating panels that can replace traditional forms of insulation. Even more compelling is the possibility for retrofitting existing buildings with relatively thin panels that can significantly improve their thermal performance. Since buildings last for such a long period of time, retrofit solutions are going to become an important part of reducing the amount of energy used by buildings without needing to demolish and replace everything that has already been built.