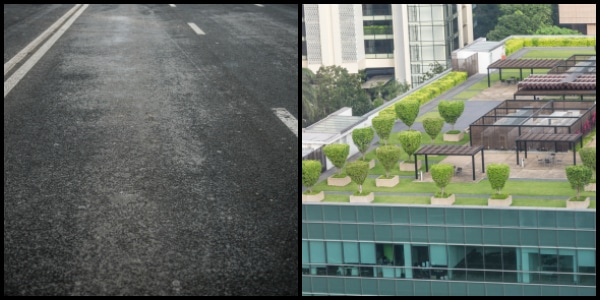 “How cities manage the sunlight and rain that falls on them has a huge impact on inhabitants’ health and quality of life,” the report begins. “But city leaders and planners generally do not manage or even think about their city’s rain and sun in a systematic way and, as a result, mismanage or undermanage these two great natural gifts. This mismanagement costs cities billions of dollars in unnecessary health, energy-, and stormwater-related costs, degrades city comfort, livability and resilience, and contributes to climate change.”

Smart surface technologies include the use of green roofs, cool roofs, photovoltaics, and porous pavements.

“This report represents a major step in understanding and quantifying the benefits of adopting cost-effective strategies to manage sun and rainfall at a city level,” said Greg Kats, lead author of the report. “Increasing summer heat and smog threaten city livability and summer tourists. This report provides a powerful framework to combat climate change while improving public health and saving money.”

The quoted $5 billion in savings is from avoided health care, energy, and stormwater processing costs. Cleaner air, cooler temperatures, and more controlled stormwater flow will reduce the size of the systems designed to handle this issue. According to the study, over 40 years this could reach $5 billion just in the Washington, D.C. area.

“What this report convincingly demonstrates is that there are cost-effective technologies and strategies for managing sun and water that will deliver billions of dollars in financial benefits to the city and its residents,” said Dan Tangherlini, former Washington, D.C., city administrator and former administrator of the U.S. General Service Administration. [emphasis added]

“Delaying this transition would impose large financial and social costs, particularly on places of lower economic opportunity [and on] the elderly and children. We now have the roadmap—now we must follow it.”

Use of smart surface solutions city-wide would cost-effectively achieve a range of sustainability, livability and competitiveness objectives, including:

Partners in this report include the American Institute of Architects, the National League of Cities, DowntownDC BID, USGBC, the National Housing Trust and the Chesapeake Bay Foundation.


« What Technological Development Will Most Reduce Climate Change?

Secrets Of The Sydney Opera House »