Start-Ups Aim To Turn All Windows Into Solar Power Generators

Which would you rather have, 1,000 square feet of rooftop solar panels that are 20% efficient or 10,000 square feet of solar panels that are 5% efficient? The math says more of the less efficient devices is the right answer. A new Massachusetts start-up called Ubiquitous Energy is betting the coatings it has developed could turn the 50,000,000 square feet of windows in commercial buildings in the US into sources of solar power. Commercial buildings generally have 10 to twenty times as much window area as roof space, which means windows from Ubiquitous Energy could generate more electricity than would be possible from any other source. 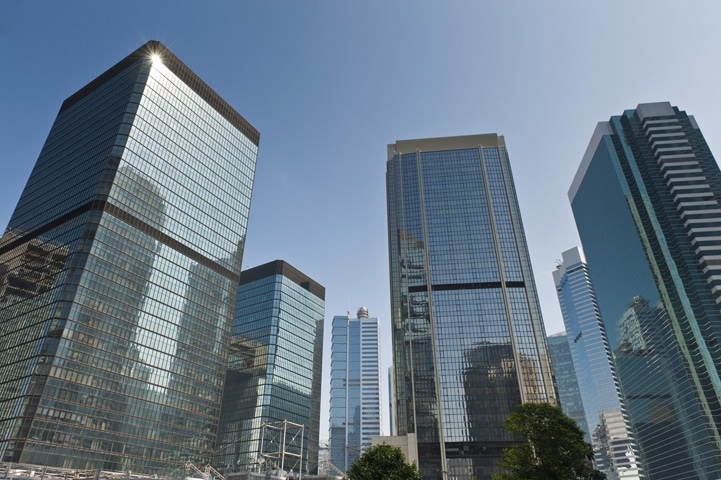 Ubiquitous Energy is the result of a research program at MIT supported by the National Science Foundation. Its founders, Miles Barr, Vladimir Bulovic, and Richard Lunt realized that visible light represents only about a third of the energy available from sunlight. More than half is in the form of infrared light and about 10% falls into the ultraviolet range.

What if they created a coating for windows that turned some of that infrared and ultraviolet light into electricity? The glass would appear clear to the human eye but produce electricity whenever it was exposed to sunlight.

So far, the idea exists only in the laboratory, where the efficiency rate is hovering at about 5%, but the scientists believe they can get that up to 10% by tweaking the formula for the coatings. “We’re on a trajectory to get to 10% efficiency without impacting the inherent transparency of the material,” says Ubiquitous Energy CEO Miles Barr.

The technology allows visible light to enter the interior of a building, meaning that less artificial interior lighting is required. It has the added benefit of blocking the infrared portion of sunlight, which reduces the amount of cooling required for interior spaces. The difference may be minuscule when talking about a single family home, but could save millions of dollars when the issue is cooling a 50-story commercial building. 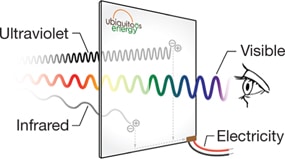 According to Ubiquitous Energy, it “has redesigned the solar cell to selectively transmit light visible to the human eye while absorbing only the ultraviolet and infrared light and converting it into electricity. This makes ClearView Power™ technology the first truly transparent solar technology, allowing any surface to convert ambient light into useful electricity without impacting the way it looks. Two thirds of the light available for energy harvesting is in the ultraviolet and the infrared, leading to practical efficiencies over 10% while maintaining up to 90% visible transparency.”

The company is currently seeking to commercialize its technology, which may include coatings for the screens of cell phones and other digital devices that could extend their battery life. “To bring ClearView Power technology to market, Ubiquitous Energy established prototyping and pilot production capabilities in the Silicon Valley with a complete set of fabrication, characterization, and environmental testing tools.

Ubiquitous Energy is not the only company interested in window coatings that produce electrical power. In England, PolySolar has also created solar power window coatings that transmit visible light while turning the sun’s rays into electricity. CEO Hamish Watson says the company is working closely with German chemical group Merck. “It is producing and developing our active material — a colorless absorbent layer which can be liquid printed,” he says. “So it’s a printing process rather than the more traditional use of a big vacuum chamber.”

The advantage of the printing element is that any size, shape and variation of the glass a customer wants can be produced. Watson says there are other advantages as well. “It works at lower light levels, so it’ll work down to less than 10% of sunlight,” says Watson. “It doesn’t change its efficiency depending on the amount of light it’s getting.”

The coated windows can be placed on the vertical surfaces of a building. Ambient and reflective light are all absorbed, so the position of the panels isn’t as critical as it is for the original solar panels that have to soak up as much direct sunlight as possible. Also, when one panel is shaded, the others are not affected, which can be the case when there are lots of solar panels together in a series string. In that case, they can be like Christmas tree lights. When one goes out, they all go out.

“With our technology, you link in parallel to already high voltage panels,” Watson says. “That means that if one is shaded, the whole lot don’t go down. Our [panels] are always working at their optimum performance across an array, rather than basically being at the worst performing level of any panel in a series string.”

In the US, another company is pursuing similar solar power technology. Located in Columbia, Maryland, SolarWindow Technologies announced on September 6 that its SolarWindow™ can pay for itself within a year. After that, the electricity produced and the savings on cooling go on and on for the life of a building. It says that claim is backed by an independently-validated financial modeling study. Solar panel systems typically require 5 to 11 years to repay the cost of installation.

Another significant advantage of the SolarWindow™ system is that it can be installed on existing glass surfaces. That dramatically reduces installation costs. The company also says, “SolarWindow™ can be applied to all four sides of tall towers, generating electricity using natural, shaded, and even artificial light. Conventional solar simply does not work in shaded areas or perform under artificial light.”

The coating uses organic, non-toxic materials, principally carbon and hydrogen. It can even be applied to flexible substrates such as plastic. “Because of the family of materials we use and the way in which we architect our design, the final product is generically referred to as an organic photovoltaic solar array,” the company says.

Making electricity from coatings on window glass can pay big dividends for the environment. SolarWindow claims a typical installation on a large commercial building keeps 12 times as much carbon dioxide out of the atmosphere as a solar panel array.

We all want to be good stewards of the earth but money makes the world go round. These three companies have solar power solutions that should gladden the heart of any commercial building management team.