We have enjoyed following the vision and ensuing work leading to the development of US Bank Stadium in Minneapolis, now scheduled to open this August.

Here is the most important item to keep in mind about this project: we’re not just looking at a new Minnesota Vikings football stadium replacing the old Hubert Humphrey Metrodome. Here the $1.1 billion investment involves a new kind of product for a sporting franchise and a government. This new-fangled stadium product represents the savvy evolution of how large-scale events can be showcased and marketed, ultimately drawing in crowds and a new culture of broad-based entertainment choices, from sports to music, dance, and dining — all which can economically invigorate both the stadium district and the surrounding neighborhood.

As this new all-purpose entertainment center nears completion, visitors should marvel at how development took place for this exceptional city center showcase, from development strategy to business plan, and then execution. In short, this new stadium joins a growing list of new stadiums in the US and overseas where visitors don’t simply sit on a semi-comfortable seat, watch a game, then head home.

Look at what takes place this August in Minneapolis:

People at the stadium are happy to report, “It’s been over 29 months since ground was broken to begin the construction of US Bank Stadium and now the end is finally in sight.”
US Bank Stadium will also be home to Super Bowl LII in 2018 and the CAA Final Four in 2019.

The fiscal side of the development

This development concerns more than just a stadium. Insiders estimate the project has been instrumental in $1 billion in surrounding development.

In terms of generating employment, this development is expected to create 3,000 full and part-time positions. Economic activity from the stadium and Vikings operations is projected to generate over $26 million a year in tax revenue and over $145 million in direct spending by stadium ticket-holders. 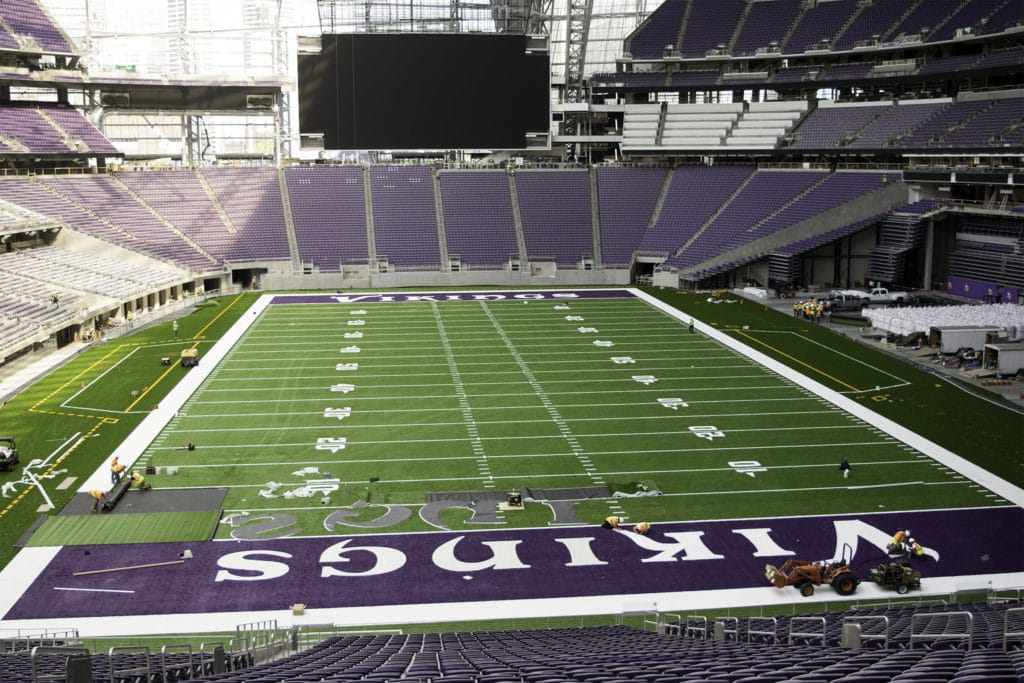 The Minnesota Sports Facilities Authority (MSFA) and SMG announced this morning the grand opening of U.S. Bank Stadium Public Tours, a year-round, guided tour program for the community to discover and explore the new home of the Minnesota Vikings.

“US Bank Stadium Tours include a behind the scenes look at the well-appointed clubs and suites, the press box, and the Minnesota Vikings Locker Room,” said Michele Kelm-Helgen, chairperson of the MSFA.  “Well-informed tour guides will lead the exploration of the stadium, sharing facts and figures that highlight the Nordic-inspired architectural features, iconic ethylene-tetraflouroethylene (ETFE) roof structure and the signature glass pivoting doors. U.S. Bank Stadium Tours also include an opportunity to take in the one-of-a-kind Minnesota-based art collection furnished by the Minnesota Vikings.”

Tickets for US Bank Stadium Tours went on sale beginning Thursday, May 26 at 10:00 am at ticketmaster.com, by phone at 1-800-745-3000, and at all Ticketmaster outlets. Private and group tours may be booked by calling 612.777.8776 or emailing tours@usbankstadium.com beginning on Thursday, May 26. Tour availability and routes may vary due to stadium events and activities. Tours are wheelchair accessible and ADA assistance will be provided upon request.

“A public Open House is slated for Saturday, July 23 and Sunday, July 24 to celebrate the grand opening of U.S. Bank Stadium. This two-day Open House is family friendly and packed with activities for all ages. A sneak peek of the main concourse, club space, and other interior stadium locations will be included in the Open House. Tickets for the Open House are free to the public and will be made available through Ticketmaster at a later date.”

For anybody who happens to find themselves near this site, it is well worth the visit. For such a large facility, the place feels remarkably intimate, fun, and memorable.

Images via US Bank Stadium