Vice President and Prime Minister of the UAE and Ruler of Dubai His Highness Sheikh Mohammed bin Rashid Al Maktoum has stated the UAE stands as one of the major incubators of innovation and future technology in the world today.

“We announce today the opening of the first 3D-printed office in the world, after less than one month of launching Dubai 3D printing strategy which showcases a modern model of construction. This is an experience we present to the world on utilizing future technology in people lives,” Sheikh Mohammed said in a press announcement. 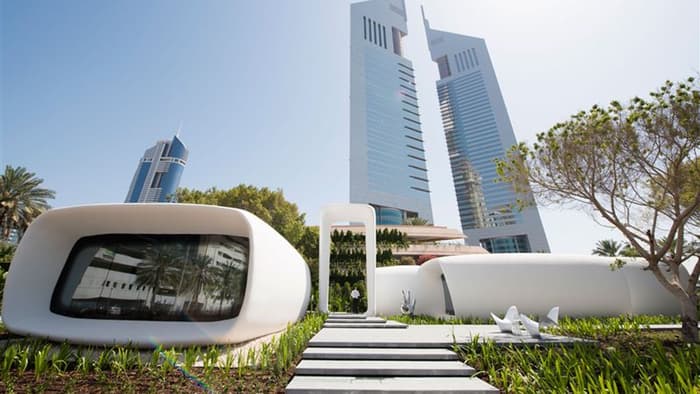 Let’s start with the printer: a construction giant, measuring 20ft x 120ft by 40ft. As Sheikh Mohammed put it,

“We implement what we plan and we pursue actions not theories. The rapidly changing world requires us to accelerate our pace of development as history does not recognize plans but achievements,” Sheikh Mohammed said during the opening of the ‘Office of the Future’, the first 3D-printed office in the world. The building on the Emirates Towers premises will house the temporary office of the Dubai Future Foundation.

“The 3D-printed office was constructed using a special mixture of cement and a set of building material designed and made in the UAE and the United States. These materials have undergone a range of tests in both China and the United Kingdom to ensure their reliability. An arc shape was adopted for the building for safety purposes and to ensure the stability of the building.”

In total, the completed building covers up to 250 square meters. The design was conceived to provide opportunities to stimulate innovation and communication between work place teams. The design also offers space for exhibitions and workshops, while offering  key services within the building, such as electricity, water, telecommunications and air-conditioning. 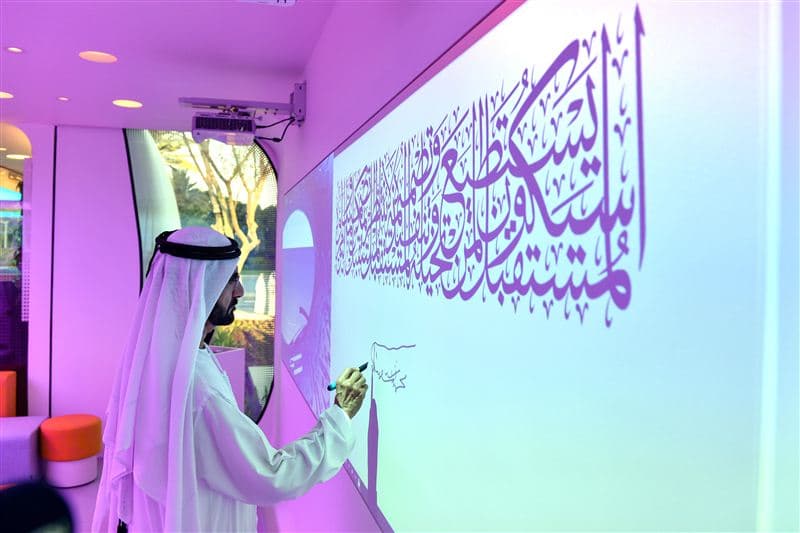 Features have been adopted in the office building to reduce energy consumption such as window shades which offer protection from direct sunlight and keep the building cool.

According to the UAE press announcement, in order to manage the execution of the project, additional mobile printers were located at the construction site, in addition to computers to ensure quality control, facilitate the printing processes, and management of different project requirements.

The full model took only 17 days to print, after which the internal and external designs were adopted. The office was installed on site within two days, considered significantly faster than traditional construction methods involving A category office buildings.

As Adam Williams has written for gizmag, “3D printing technology promises to revolutionize architecture in the near-future, allowing designers to literally click-and-print complex buildings at a lower cost and faster speed than traditional construction methods allow.”

Sheikh Mohammed concluded: “We see this project as a case study that will benefit regulators as well as research and development centers at the regional and international levels on real application of 3D printing technology. We are documenting this experience and building on it to take advantage of the most important lessons, which will serve as reference points to take this technology to new levels.”

Expect to see this technology on many new sites.

Images via Government of Dubai