Florida Town Aims To Be Greenest Community In America

In southwest Florida, the greenest community in America is under construction. 10 years ago, real estate developer Kitson & Partners purchased a large tract of vacant land ten times the size of Manhattan on the banks of the Coloosahatchie River east of Fort Meyers, Florida.

They immediately sold off 73,000 acres to the State of Florida and Lee County to be left in its natural state in perpetuity. That’s the part that got them the land in the first place: their offer was lower than several others, but the seller was impressed with their commitment to protecting much of the land from development.

Now, Kitson & Partners are about to begin building a brand new community on the remaining land. But it is not going to be just another Florida community — a collection of condominiums as far as the eye can see. The new town will be called Babcock Ranch and it is designed from the beginning to maximize opportunities for walking and bicycle riding. The homes will be close to the commercial center. There will be dedicated walking and bicycle paths that do not compete with vehicular traffic.

When building the greenest community possible, it’s easier, Syd Kitson says, to start from scratch with better infrastructure than to retrofit an existing suburb or city. “How you design your roads—thinking about pedestrian walkways and bike paths, if you’re making it walkable and bikeable and pedestrian-friendly—doing that from the beginning is much easier.”

Babcock Ranch will also be powered largely by solar power. Florida Power & Light is building a solar farm comprised of 350,000 solar panels. In sunny Florida, they will be produce enough electricity to power a community of 50,000 people. FP&L uses natural gas to run its nearest electric generating plant. In total, Babcock Ranch will have some of the greenest electrical power in the nation.

Eventually, grid scale battery storage may be added. That will make it possible to store clean, renewable power during the day for use after the sun sets. They plan to work with several companies to test energy storage technology that other communities may eventually also use. “The holy grail for renewable energy is figuring out how to store it so you don’t need to turn to the grid at night,” Kitson says. “We’re talking to several companies about how we can do that, even at a neighborhood scale, almost like a micro-community of a system.”

Kitson & Partners have other ideas for making their new community green. They are planning to use autonomous driving cars and a ride sharing app similar to Uber or Lyft. There will be no public transportation system, as such.  They are currently working with a company to build out that system, taking advantage of new legislation that makes Florida one of the most autonomous-friendly states in the country, according to Gas2.

Kitson expects driverless cars will have an impact on how communities are designed in the future. “We’re really looking closely at parking, the size of the streets, what ultimately that’s going to look like when you have driverless cars within the community,” he says. “It will change the design parameters. As these things become more commonplace, people may eventually turn to just one car because they know they can use an autonomous vehicle. So what do you do with the garage space eventually?”

Babcock Ranch will also be a living laboratory for other technology. Houses will have tele-health systems built in, and graywater recycling infrastructure will be standard. 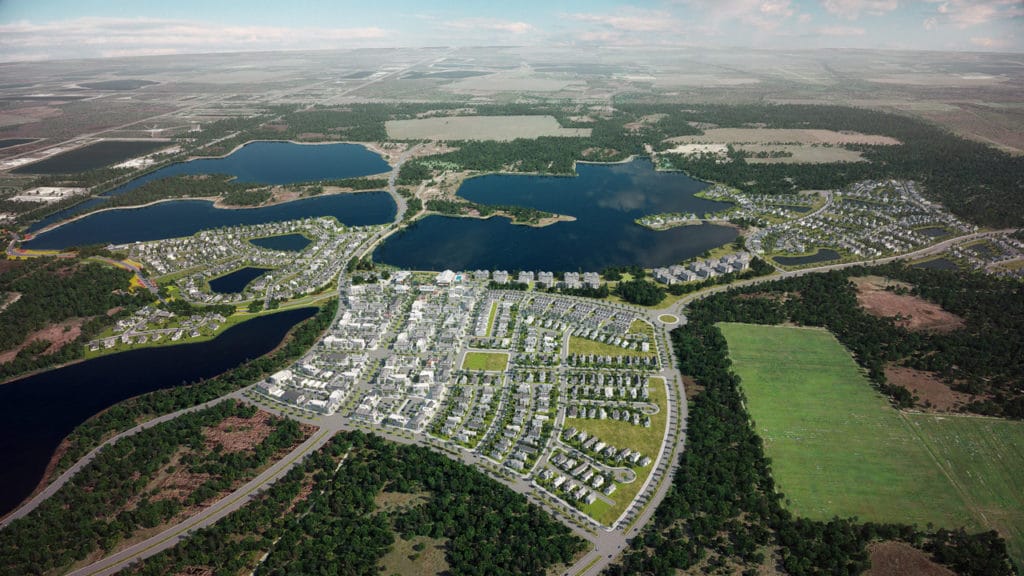 Beyond the residential and business areas of the town, the surrounding land will be restored for wildlife or recreation. Seventy five acres of former farmland will be restored as a habitat for panthers.  Over the last ten years, wetlands and other waterways have been partially restored. Crayfish, native birds, and native plants have returned to the area.

According to Ecopreneurist, 90% of the land purchased from the prior owner was sold to the state of Florida and the county for preservation. “We were able to preserve those 73,000 acres forever,” says Kitson. “It can never be touched. If you ask me what I’m most proud of, it’s that.”