Car Free Building In Austin Will Have No Parking 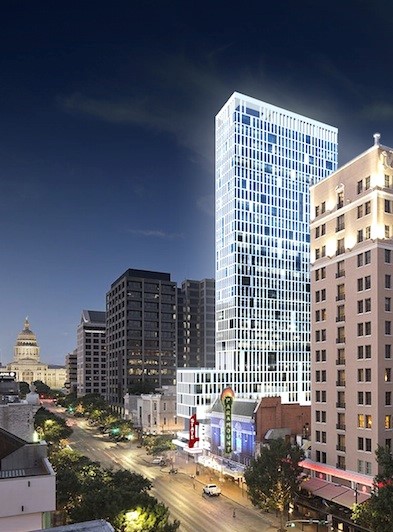 Developers in Austin, TX are looking to build a 30-story mixed-use building in the heart of busy downtown without adding any additional parking. The building, called The Avenue, will not contain a parking garage or any other on-site parking, and is being billed as the first “truly car-free luxury development in downtown Austin.”

Residents and visitors to the building’s shops and offices will be asked to use alternative transportation, or park somewhere else, when using the building’s facilities.

“This is the first true urban residential tower in Austin,” Brad Nelsen, an Austin architect and partner in Congress Development Partners Ltd, said. “This is built for people who work and live 24 hours a day downtown,” and who walk, bicycle, or use other transportation options to go to the grocery store or other trips.

Apartments in the development will be smaller than usual, 420 to 970 square feet, with efficient designs to help occupants use the space well. Rents will also be lower, about 15% less than the going rate in downtown.

A restaurant, bar, and community theater are looking to take up space on the first floor of the building.

Residents are expected to “move into this project knowing that there won’t be a place for a car,” Richard Suttle Jr., an Austin attorney representing the developers in the city review process said.

“There are a lot of people living downtown now that don’t have a car. The downtown workforce is getting younger, and the younger generation is moving away from having to have a car. There is a (bike rental) facility adjacent to this site, and it will probably expand.”

Robert Spillar, the city’s transportation director, said downtown, and specifically the Eighth and Congress area where The Avenue will be located, “are at the epicenter of accessibility within Austin.” So building a new project without parking “is not that unreasonable, given the location and access to (nearby) travel options.”

Brad Nelsen said that the developers aren’t seeking any zoning changes, density bonuses or incentives from the city.