The solar installation is complete atop the IKEA Las Vegas store. The opening is scheduled for May 18, 2016.

Once commissioned, an IKEA press announcement states the project will be the largest single-use retail rooftop solar array in Nevada. 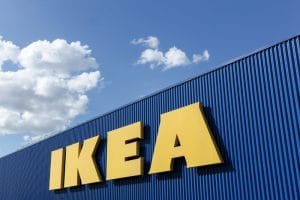 The store’s 240,504-sq.ft. solar comprises a 1.14 MW rooftop system using 3,620 panels. The panels will produce approximately 1,750,000 kWh of electricity annually for the store. Translated into a global warming perspective, this production represents the equivalent of reducing 1,207 tons of carbon dioxide. That total equals reducing the emissions of 254 cars or providing electricity for 166 homes yearly.

“Installing the solar panels is another exciting and sustainable step in the progress towards opening the future IKEA Las Vegas,” said Amy Jensen, store manager. “IKEA strives to create a sustainable life for communities where we operate, and IKEA Las Vegas is adding to this goal with Nevada’s largest single-use retail rooftop solar array.”

It has certainly created a solar electricity showcase. This array represents the 43rd solar project for IKEA in the U.S., contributing to the IKEA solar presence at nearly 90% of its U.S. locations, with a total generation goal of 40 MW.