For those having a proclivity for flooding paranoia, this greenhouse with legs might arrest some of those fears. 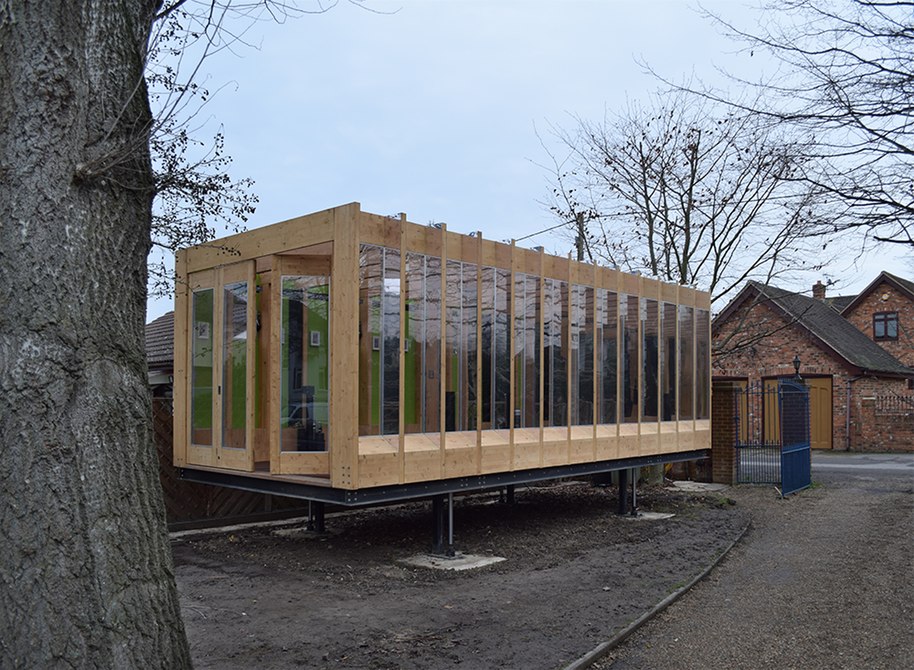 Conceived and developed by BAT Studio, we are told this UK structure has been constructed in an area which experiences frequent flooding. The Greenhouse That Grows Legs incorporates a novel approach to flood protection. “The building is fabricated on a bespoke steel frame with four hydraulic legs, capable of lifting the building 800 mm from the ground on command.”

The story of flood salvation goes this way:

“When Middlesex, UK, homeowners Erica and Peter suffered their fifth flood in 2014, they had to do something. Deciding that they loved their River Thames-based home far too much to move, the couple commissioned architecture firm BAT Studio to build a greenhouse that could double-up as a flood-proof safe place to store their belongings.”

This greenhouse measures 29 sq m (312 sq ft). It features one open interior space. Named the “Greenhouse That Grows Legs,” the structure has glue-laminated timber supported on a steel frame. Should a flood advisory occur, four hydraulic legs work to lift it 800 mm (2.6 ft) off the ground.

“We love our house by the Thames – the only drawback is the river floods,” said owner Erica in a Gizmag article. “When we bought the house in 2000 we were told the flood risk was 1 in a 100, but we have flooded five times.”

“We approached BAT Studio for a solution that could provide a safe refuge for bulky items during a flood but was also a useful space for the rest of the year.” The building was completed in 2015.

BAT Studio writes on its website: “The aim was to construct an experimental building exploring a novel approach to flood defense whilst not compromising the quality of the building’s design. It is a Greenhouse Which Grows Legs – but we think it’s also a very nice greenhouse!”

Passing on their original idea of a floating structure, the BAT designers came across the idea of using a lifting mechanism which could be lowered after flood waters receded. The team concluded a floating structure could face a mess when coming to rest atop uneven debris and silt.

Not a bad idea to mitigate the potential damage from flooding. Price, however, might be a restriction for numerous property owners. Also expect numerous municipal building departments to take plenty of time in their deliberations prior to issuing a building permit.