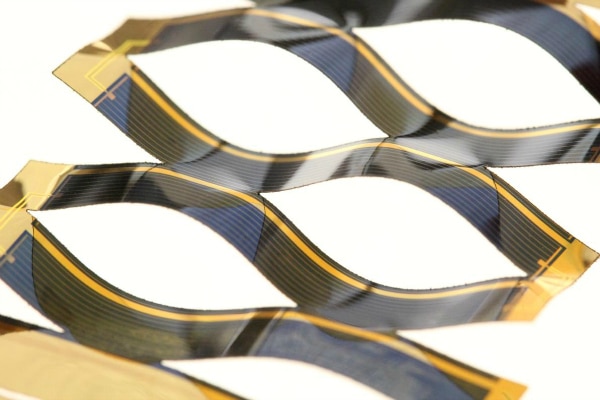 Researchers at the University of Michigan have created a lattice-like solar cell that can stretch like an accordion, allowing it to tilt along the sun’s trajectory and capture more energy.  The details of the oddly shaped solar film, inspired by the Japanese art of paper cutting called kirigami, are in a paper recently published in the journal Nature Communications.

The new design helps fix a problem with most solar power systems – the sun moves and the panels don’t.  By slightly stretching them, the strips of flexible, thin-film gallium arsenide pop out of their pattern and become three-dimensional, allowing the surface to be focused on different locations in the sky.  The strips can track the sun over a radius of about 120 degrees.  It won’t affect the look of solar panels much, as the cells will be sandwiched between two surfaces.

The film can collect 30 percent more solar energy than conventional cells would, according to co-author Max Shtein, a University of Michigan engineer who teamed with artist Matt Shlian to hatch the design.  There is a tradeoff however.  Panels made with the strips would need to be about twice as big.  “You’re stretching the solar cell, so you have to have room to stretch it into,” he says.

The team tried many kirigami cutting patterns, some more complicated than the winning one.  “… It turned out that this simple pattern was actually one of the best,” Shtein says.  “It has this property where it kind of moves out of its own way and prevents shadowing.”

Keith Emery, a scientist who evaluates solar panel designs and efficiency for the National Renewable Energy Laboratory, calls the concept “exotic,” “clever,” and “one of the strangest ones I’ve ever seen.”  He notes that the Michigan paper only demonstrates proof of concept.  “There’s a lot of loose ends and a lot of potential problem areas” in making kirigami cells work beyond the lab, he says.

Can the material withstand that much stretching, day in and day out?  Can it handle extreme temperatures?  What about the hardware and energy required to move the cells back and forth?  “It’s not clear that that’s going to survive 25 years in the field,” Emery says of the mechanics required.

The prototype used in the study was about half the size of a dollar bill, so the system needs to be tested at larger scales to see if it is feasible.

Due to the size of the panels that are needed, Shtein says that in the short term it would be more feasible for smaller aerospace applications.  For example, sun tracking would be important for powering moving objects like satellites.

Source and Photo: National Geographic, courtesy of University of Michigan