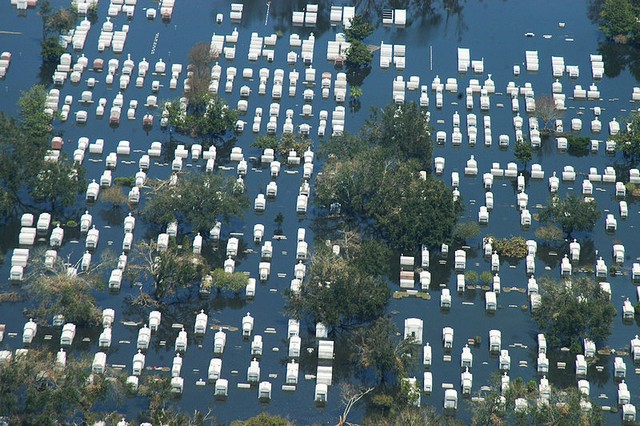 Resiliency is the ability to bounce back following adversity. After the devastation wrought by Hurricane Katrina on New Orleans, many questioned whether the city could ever be rebuilt. But actor Brad Pitt organized a campaign called the Make It Right Foundation. It has built more than 100 homes in New Orleans, most of them in the worst hit area of the city — the Lower Ninth Ward.

Every one of the houses Make It Right has constructed meets LEED Platinum certification standards, the highest designation for sustainable building recognized by the U.S. Green Building Council. All of them are raised 5 or more feet off the ground to lessen the chance they will be damaged by flooding in the future. All of them also have a way to access the roof from the attic to make sure residents can’t get trapped during a flood — a situation that happened much too often after Katrina.

To lower the cost of monthly utility bills for residents, the homes included solar panels that reduce energy use from external sources. The typical utility bill for electricity and  gas is $30 a month — 65% less than is typical among other houses in the neighborhood, according to Make it Right senior adviser Taylor Royle.

Its not all about saving energy. Green building materials like recycled countertops replace materials that exacerbate respiratory disease. That can improve environmental health, especially in low income communities where asthma is particularly prevalent. “It’s not just because someone in the environmental community believes in green building,” said Royle. “Green building means lower bills, fewer trips to the hospital for children with asthma.”

The Make It Right program has encouraged other champions of environmentally friendly building practices to get involved in New Orleans, according to Time magazine. The green building group Global Green has become a lasting presence in local New Orleans communities, offering workshops on green building and inspecting homes to help identify cost effective improvements, says Michelle Pyne, a senior staffer in New Orleans for Global Green.

Global Green has also moved beyond building green homes to advocate for public policy that encourages green building in the public sector and other strategies that make new structures in the region more sustainable. New Orleans public schools—110 of which were severely damaged—now have sustainability programs and any new schools must be built to at least LEED Silver standards, Pyne says.

New Orleans has done a lot to prepare itself for the next hurricane, which it knows is going to come someday. Homes that are equipped to withstand storms and flooding are a key element in that preparation. Louisiana’s master plan, which provides guidelines for how to protect the city from future natural disasters, includes provisions to help fund elevated homes for homeowners who may not be able to afford the expense.

“Every dollar up front is more effective than five spent after the fact,” said Mike Foley, CEO of insurance company Zurich North America Commercial. “We need to shift the conversation from one of recovery to one of resilience.”

Note: For a heart wrenching, personal account of the devastation and human suffering that Katrina visited upon New Orleans, read One Dead In Attic by Times-Picayune columnist Chris Rose.  The best and most forthright television series about what living in New Orleans has been like post-Katrina, is the HBO series Treme.

The music alone is worth watching the series. It is the rich and varied musical culture of New Orleans — which blends together the city’s Cajun, Creole and Caribbean influences — that is truly the reason why this great American city has remained so resilient in the face of impossible odds for so many years.