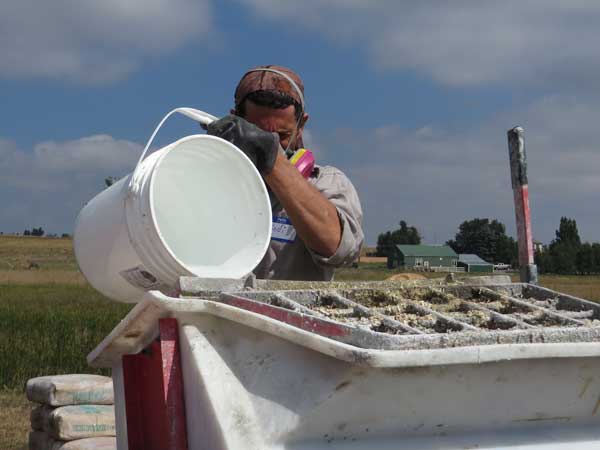 Add hemp fiber to lime and you get a lightweight building material that can be shaped like a cinder block. When fully cured, it floats in water. Buildings up to 10 stories tall have been built from hempcrete in Europe according to Philly.com.

Hempcrete is made using the woody, balsa-like interior of the Cannabis sativa plant (the fiber for textiles comes from the outer portion of the stalk) combined with lime and water. Though it lacks the structural stability its name might suggest, hempcrete does provide natural insulation that is airtight yet breathable and flexible. It is free from toxins, impervious to mold and pests, and virtually fireproof.

Best of all, hempcrete is a sustainable building material because hemp can be grown and replenished relatively quickly. Hemp based building materials could usher in a new era of “green” building products, according to the New York Times.

But first, society needs to unlearn 75 years of lies told about hemp by promoters of wood, paper and plastics products. They conspired to create and produce perhaps one of the most successful propaganda campaigns of all times — a movie entitled Reefer Madness that depicted marijuana users as dangerous criminals with violent tendencies. Based on the reaction to that film, Congress banned the cultivation of hemp in 1937.

In fact, hemp has no pharmacological connection to the its cousin, the marijuana plant. It grows fast with little water or fertilizer. It is stronger than cotton but can grow in all 50 states. One acre of hemp can produce 4 times more paper than an acre of trees. Hemp is ready to harvest after 4 months. Trees take 20 years or more to reach maturity. As a renewable energy source, hemp produces more biomass than any other crop. Hemp oil from seeds can also supply the raw material for biodegradable plastics.

The Farm Bill of 2014 passed by Congress and signed by  President Obama legalize the cultivation of hemp for the first time in 3 generations. But the stigma associated with hemp remains, making farmers reluctant to try growing it. Building inspectors are also largely unfamiliar with the construction characteristics of hemp based building products and remain skeptical of approving its use.

It will probably take another 70 years to undo the damage done by the smear campaign against hemp. All I can say is, if the wood, paper and plastics industries feared it that much, hemp must have some high powered benefits. In fact, more than 30,000 products can be manufactured from hemp. With the curse now broken, it’s time for America to embrace the versatile hemp plant once again. As George Washington once said, “Make the most of the hemp seed. Sow it everywhere.”

Bamboo Decking Is Durable And Sustainable »