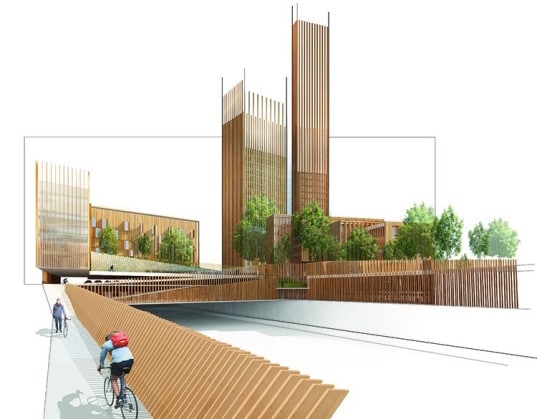 Vancouver architect Michael Green is a world leader in designing and building tall buildings out of wood, says a report in the Vancouver Sun. In fact, he quite literally has co-authored the definitive book on the subject. It’s called The Case For Tall Wood Towers and it has caused a stir among architects since it was first published in 2012.

Now, in partnership with French architects DVVD Paris and developer REI France, he has proposed a 35 story carbon neutral wood skyscraper for the Reinvent Paris competition, a bold effort by local authorities to inspire innovations in urban design and sustainability that will revitalize Parisian architecture.

For the contest, Paris authorities have offered 23 sites around the city for potential redevelopment, seeking proposals that demonstrate architectural, social and environmental innovations to help revitalize the city.

“We are launching this call for innovative urban projects in order to prefigure what the Paris of tomorrow might be,” Mayor Anne Hidalgo said in a statement on the competition’s website. So far, the city has approved 650 of 815 applications submitted in the first stage of the competition. The response has been global, with proposals coming from 15 countries including Brazil, Singapore and South Korea.

One of the primary benefits of wood buildings is their contribution to global sustainability. If built, the tower would sequester 3,700 metric tons of carbon dioxide — equivalent to removing more than 2,000 cars from the roads for a year. Wood construction products also require significantly less energy to produce than concrete or steel.

A new study by Planet Ark has some startling findings about the benefits that wood provides for the building occupants. The report says, “The studies examining the effects of wooden rooms and furnishings clearly demonstrate that the presence of wood has positive physiological and psychological benefits that mimic the effect of spending time outside in nature.

“The feelings of natural warmth and comfort that wood elicits in people has the effect of lowering blood pressure and heart rates, reducing stress and anxiety and increasing positive social interactions. Wood products within a room have also been shown to improve indoor air quality by moderating humidity.” 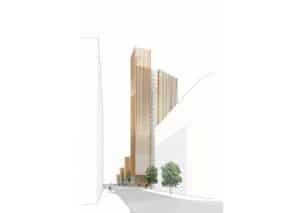 Green believes Paris is the perfect place to showcase the benefits of using wood to construct tall buildings. Gustave Eiffel’s 301-metre tower “blew the socks off the entire idea of how tall you could build a building,” he said in an interview. Why not let Paris do for wood construction the same thing it did for steel construction when Eiffel’s creation got built?

Green and his partners deliberately chose the largest parcel available in the design competition for their proposal, which calls for a mixed use development comprised of markets, a range of housing options, a student hotel, and urban agriculture. The development, which the proponents have named Baobab, would revitalize what is now a parking lot for a bus depot. The buildings will rise above the parking area and feature walking and bike paths similar to New York City’s High Line.

For those who hear about wood buildings and immediately think of the risk of fire, what Green and his partners are proposing is not your grandfather’s timber frame house made of 2X4’s. Today, architects and builders are using cross laminated timber (CLT) — a technique that glues multiple layers of dimensional lumber together using high strength adhesives to create structural members that are lighter and stronger than steel. The number of laminations and their orientation can be customized to meet the structural needs of various building parts.

Before Green could get permission to build his first CLT structure, the 65 foot high Wood Innovation and Design Center in Prince George near Vancouver, he had to convince local officials that timber panels and beams do not easily catch fire and meet the same building code requirements for two-hour fire separation between floors that apply to steel and concrete structures.

Proposals for taller wood structures are being advanced in North America, including an 18-story student residence building at the University of British Columbia. Interest has come from Sweden and Austria as well.

Lend Lease, Australia’s largest contractor,  has built an 8 story apartment building using CLT at Victoria Harbor in Melbourne. Its designer, architect Alex de Rijke, says “the 18th century was about brick, the 19th about steel, the 20th about concrete, and the 21st century is about wood.” According to Lend Lease, building with CLT is 30% faster than traditional construction with less waste.

If Michael Green’s design proposal is accepted by Paris officials, it may prove to be a turning point for sustainable construction using cross laminated wood throughout the world.