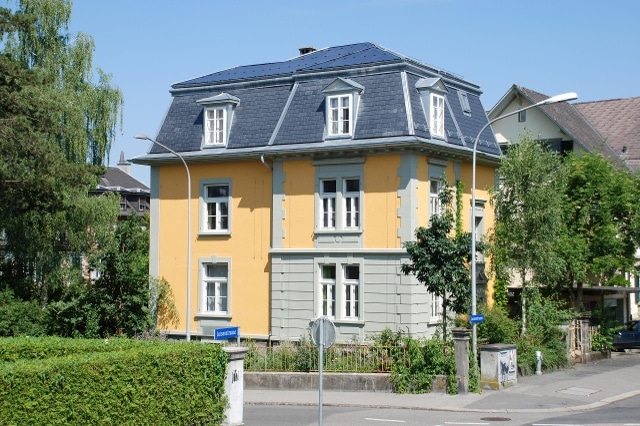 A Swiss couple has had first hand experience with making an energy efficient historic home. Along the way, they found that changes in national policy can have a dramatic effect on the process. Regine Röthlisberger and Manuel Hutterli wanted to greatly reduce the carbon footprint of their 116 year old house in Bern, Switzerland. But when they first proposed adding solar panels to their roof, they were firmly rebuffed by Bern’s Office for the Preservation of Historical Monuments.

Built in 1898, their home is considered a building requiring the highest level of historical protection. Solar panels on that historic slate roof? No way. But then something happened 12,000 miles away that changed everything. In March, 2011, the nuclear generating plant in Fukashima, Japan suffered a catastrophic meltdown that sent shockwaves through the entire nuclear industry.

Up to that point, Switzerland was firmly committed to nuclear power. But that attitude changed dramatically after Fukishima and the country pivoted to embrace renewable energy, primarily from photovoltaics. Change at the top brought change at the local level. Suddenly, the plans that Regine and Manuel had for their historic home were no longer verbotten. 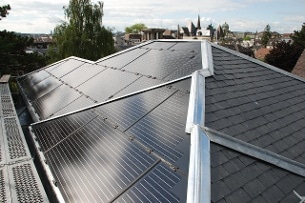 Which is not to say that the path forward was easy. The owners are both physicists. They had to invent a new type of solar panel that would blend in with the existing slate roof and not be so visible from the street. Then they insulated their home from the cellar to the attic with environmentally friendly cellulose insulation wherever possible, filling all the wall cavities with recyclable polystyrene pearls. Krypton-filled double-glazed windows were designed and built that preserved the look and feel of the century-old windows and doors.

Innovation was key, according to Hutterli. “We had to find individual solutions. Components had to be assembled in a sophisticated manner to suit our needs, while the result would have to fulfill the heritage protection’s highest aesthetic requirements.”

Several contractors were reluctant to get involved in the renovation process.  With no experience in the new technologies involved, they said they could not warranty the products or their workmanship. Several quit the project, but others were excited by the challenge and signed on to bring the renovation to a successful conclusion.

Bore holes were sunk 150 feet into the earth for a geothermal heat pump system. A solar heating system for domestic hot water was installed. The solar panels generate 3,200 kWh a year of electricity and the solar heating system adds another 10,000 kWh of thermal energy. In all, the historic home now uses only 17% as much energy as it did before the restoration.

In recognition of the owners’ achievements, the Swiss Solar Agency gave them an award for their innovations, saying “The project shows what energy and emission reductions are possible even in heritage-protected objects.”  The building now emits 10 tons fewer carbon dioxide emissions each year than it did prior to the renovations. Just imagine how those savings will add up over the next 116 years?

The path was not always smooth, however. Hutterli helped develop and install the slate collectors as well as controls and sensors used for monitoring because no finished products were available on the market. The project required his personal input but also sacrifices from the family.

Röthlisberger and Hutterli told Swiss Info, “We decided to live on a construction site for three years so we would be able to develop and adjust the pilot and the permanent installations on site. This allowed us to achieve an energetically optimal renovation.”

Thomas Ammann, an engineer at the Swiss Home Owners’ Association, say that such a complete renovation was only possible because the owners had a combination of “resourcefulness and financial means”. But times are slowly changing and there has been a shift in the thinking of the heritage protection office. “Today, they are more open to something like photovoltaics,” Ammann said. “This would have been inconceivable only a few years ago.”

And it would have been inconceivable without the technical skill and dedication of the owners. Röthlisberger and Hutterli have truly been pioneers in the art of improving the energy efficiency of historic properties.