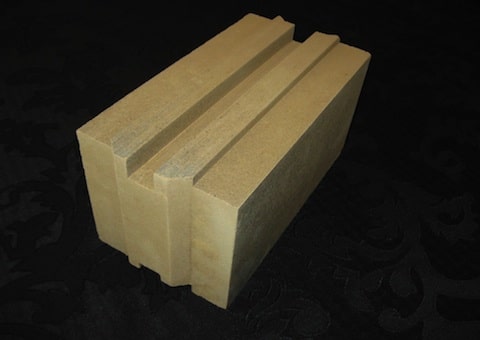 Meet the Titan Brick, a new building block made of 90% dirt that has been waterproofed with non-toxic chemicals. The manufacturer, Titan Brick, Inc. of San Antonio, Texas, claims many advantages for its invention, beginning with high thermal mass and a heat resistant coating which combine to give it an R-20 insulating rating. That alone can cut the energy costs of a building made with Titan Brick by 50% or more.

The company says its Titan Brick is two and half times stronger than concrete block and is fire resistant up to 1800 degrees F. It also is mold and mildew resistant, able to withstand winds up to 240 miles per hour and can tolerate flood waters better than conventional building materials.

Titan Bricks are manufactured with an interlocking notch and are glued together using a special non-toxic glue instead of conventional mortar. Cement prices are rising around the world and cement production is named by many experts as a contributor to atmospheric pollution. By replacing conventional concrete blocks and mortar, Titan Bricks help reduce harmful environmental emissions and avoid price increases for cement products.

The manufacturer claims Titan Brick requires 90% less energy to produce than conventional bricks because it does not have to be fired. They say it is also easier to work with, which can reduce  construction time. It is also LEED Certified.

A major advantage of Titan Brick, according to the company, is that it can be produced near job sites using locally available dirt. That saves money on transportation and can provide employment for workers near construction projects.

Another significant feature is that all plumbing and electrical lines are installed as the Titan Brick is set in place. No wood framing or gypsum board is needed. Titan Brick makes its own interior and exterior finished wall. When the job is done, both are sealed with a spray on coating and painted.

Each Titan Brick weighs about 20 lbs and is about 8″ long by 8″ wide and 4″ tall. Installers are trained by the company so they are familiar with the unique aspects of building with this new material.

There is no set “per brick” price for Titan Bricks. Each job is priced according to the size and needs of the job and the availability of local materials. Contact the company directly for information on a particular application.

A new building material that does up faster, is stonger, has better insulating power and saves money? That sounds like something anyone considering a new building should look into.