Building Material of the Future – Wood? 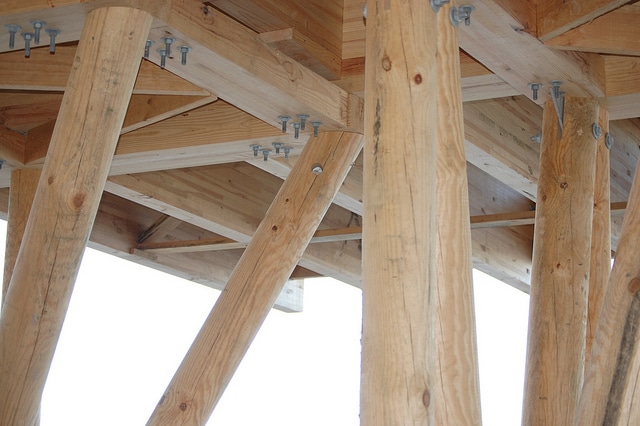 No, the headline is not a typo.  Wood is going to places it’s never been before – up!  The T3 project (which stands for “Timber, Technology, and Transit”) in Minnesota will be the tallest wood-framed building in the United States at seven stories.  The 210,000 square foot office building is causing a bit of an uproar around the country.

“This building is very unique,” Vancouver architect Michael Green says.  “It is the first large-scale office building built of timber in America.  It is part of a revitalization of century old ideas of how to build buildings.”  At a TED talk in 2013, Green spoke about of the magic of wood: “I’ve never seen anyone walk into one of my buildings and hug a steel or concrete column.  But I’ve actually seen that happen in wood buildings.”

The foundation and first story of T3 will be concrete and steel, but both the elevator core and the floor plates will be  assembled from solid columns and panels of engineered lumber.  The panels can be made as large as 8 feet by 64 feet and as thick as up to 16 inches.  Built elsewhere and trucked to building sites, the panels can be assembled more quickly than traditional steel and concrete buildings.

“Ultimately these are very large, very dense solid panels of wood,” Green wrote in his manifesto, “The Case for Tall Wood Buildings.”  Cross Laminated Timber is made from laminated layers of milled lumber set at 90 degree angles, Laminated Strand Lumber is made from a matrix of thin wood chips, and Laminated Veneer Lumber is made from thin laminations of wood, similar to plywood but on a much larger scale, Green noted.

Green said the obstacles for wood buildings are mostly regulatory.  In a 2013 interview with the Council on Tall Buildings and Urban Habitat, Green said building codes are an obstacle “because this is the first new way to build a tall building in a hell of a long time…So I often say the hardest part of the job isn’t the engineering, it’s the managing of public perceptions of the issues, and it’s education.”

It is hoped that using wood in this way will catch on, especially in places that depend on the timber economy for their livelihood, like the Pacific Northwest.  U.S. Agriculture Secretary Tom Vilsack recently announced new training programs to encourage designers and builders to look into advanced wood building materials.  Part of the “Made in Rural America” initiative, it includes a $2 million award for a project that demonstrates the viability of sustainable wood products in high-rise construction.