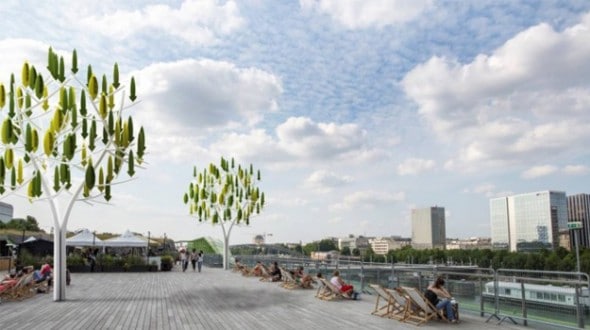 A new French start-up, NewWind, is making wind power beautiful!  Their new Wind Tree offers almost a hundred mini-windmills on an apparatus designed to look like a tree.

Due to the light construction of the “leaves,” the Wind Tree generates power at wind speeds as low as 4.4 miles per hour!  This translates into sustained operation times (an average of 320 days a year) that are almost double those of standard windmills that need higher wind speeds in order to produce electricity.  Total output for the tree is about 3.1 kiloWatts.  This is substantially below standard windmills, but they can’t operate on as many days due to higher wind thresholds.

According to Jérôme Michaud-Larivière, founder of NewWind, the idea for the Wind Tree came to him while watching leaves move in a tree on a windless day.  “On a windless day I watched the leaves driven by an invisible force that moved by indeed the slightest air simmer [sic].  I wondered how many watts it could do.  And if we collected the energy of the earthquake on the basis of the phenomenon?  Multiplied by as many sheets as a tree has, what power would give [sic]?  The Wind Tree was born.&#8221