Meet the Largest Passive House Building in the US The largest Passive House structure in the US, called The Orchards At Orenco, is under construction in Hillsboro, Oregon, a suburb of Portland. The 57 unit residential building is being built by REACH Community Development, a non-profit developer dedicated to lowering overall living costs for residents. REACH believes delivering truly affordable housing places a minimal burden on the finances of low-income families by keeping utility costs as low as possible.

How did the architects make such a large building conform to Passive House standards? It wasn’t easy, and involved an extensive review of windows, doors, flooring, roof materials, and heating systems from manufacturers around the world.

What’s Inside This Passive House Building? The exterior walls have 2×10 framing with blown-in fiberglass cavity insulation and 1.5 inch thick rigid mineral wool exterior insulation chosen for its permeability and capacity to facilitate drying to the exterior. Plywood sheathing with taped seams serves as the primary air barrier. Plastic house wrap covers the sheathing and a polyamide membrane acts as a vapor barrier on the inside.

The 3 story wood frame building sits on a slab-on-grade foundation. The ground floor slab sits on a 4-inch layer of EPS Type II insulation which also wraps around and under the perimeter and interior footings. Type IX EPS is used under the footings because of its higher load bearing capacity.

The roof is made from prefabricated wood trusses and features 12 inches of polyisocyanurate insulation. A self adhering rubberized asphalt membrane installed over the plywood roof sheathing acts as a vapor barrier and also functions as a temporary roof during construction.

With 322 high-performance windows and balcony doors going into the project, the design team researched window options extensively, looking at products manufactured in the Pacific Northwest as well as several made in Europe. The European products offered a higher level of performance at a lower estimated cost but the team did not feel comfortable specifying overseas suppliers. Ultimately, they chose Euroline windows, a company based in western Canada, because they offered the best balance of performance and cost.

The building will be served by three rooftop HVAC equipment pods, each serving 18 to 20 apartments and a portion of the common areas. Rather than designing a fully centralized system, or a decentralized system with individual HVAC units in each apartment, the pod concept offers a high degree of thermal efficiency while simplifying distribution and reducing maintenance needs. The pods will provide 90% of the heat for the building while wall-mounted electric heaters in the apartments will fulfill the remaining 10%.

Heat-recovery ventilation equipment from Loren Cook Company will be used and two high-efficiency gas boilers will provide hot water for the building.

The Orchards at Orenco building is adjacent to the Orenco station on Portland’s light rail system to facilitate low cost transportation options for the residents. Construction began in June, 2014 and completion is expected to take place in May of 2015.

Largest Passive House Building in the US 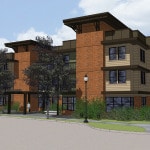 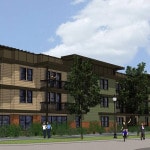 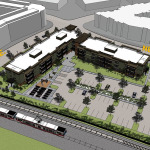 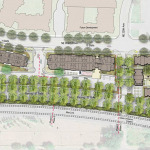 Create Thermal Barriers to Stay Warm and Save »