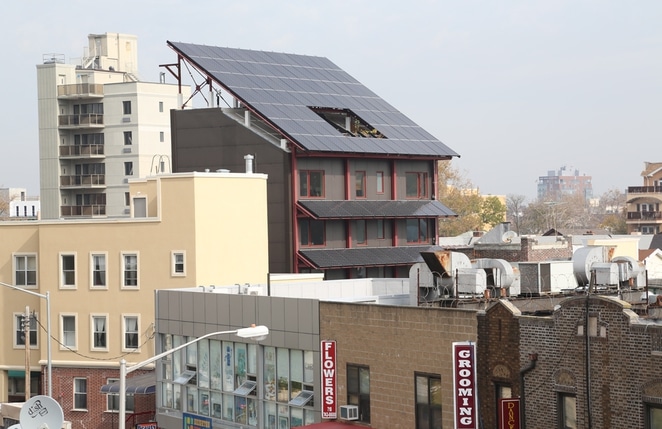 On the second anniversary of Super Storm Sandy, a ribbon cutting ceremony in the Brighton Beach section of Brooklyn announced the opening of a new net-zero building called Bright ‘N Green in the neighborhood. The date is a symbolic reminder of the importance of building in a way that contributes minimally to climate change and that is resilient in the face of extreme weather events.

The building occupies a former brownfield containing hazardous levels of lead. Today, the land has earned a Green Site Award from the New York City Mayor’s Office of Environmental Remediation. The building uses an array of green technologies. It is faced with solar panels and has a geothermal heating and cooling system made by Earth Linked Technologies.

The architect, Robert Scarano, says the six-apartment building has “a negative $6,000 electricity bill” per month and has promised tenants or future owners they will never have to pay energy bills. The individual units feature hardwood floors reclaimed from shipping containers, ultra-efficient appliances and an advanced air filtration system. The counter tops in the bathrooms and kitchens feature IceStone surfaces which use recycled glass and are made locally in Brooklyn.

The plumbing system also makes use of water efficient technologies. Gennaro Brooks-Church, a green building expert, helped to design the grey water system, which features a number of reclaimed materials. Rainwater is collected from the balconies and roof, and treated with a bio-filter system. Part of this system is visible on the ramp into the building, through a salvaged piece of glass—rocks, plants and soil serve as a filtration system that also doubles as landscaping. 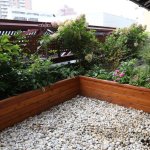 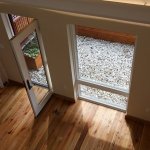 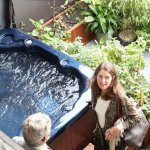 The roof features a hot tub and a small space for a container garden which is planted with vegetables and herbs. Over time, Scarano hopes the roof and walls will be engulfed in a living layer of plants, helping to further insulate the building.

Scarano is eager to share his work duplicated outside Brooklyn. Data from the building is available on the building’s website along with many other details about the technologies used. “Anyone could knock it off,” jokes Scarano. “It’s a totally open book.”