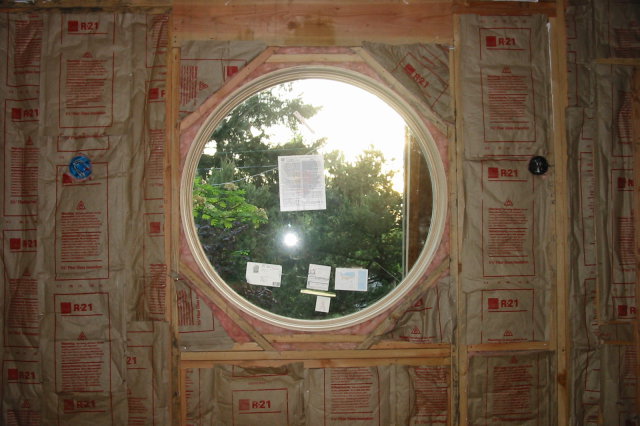 Holland and Nick Brown of Long Beach, California have been upgrading their home to Net Zero standards and blogging about their experience for AOL. At the start of their project, their house had no insulation, and old-fashioned, single pane windows.

Adding insulation and installing new windows that are more energy efficient are the two most important ways to reduce unwanted heat gain or loss in any structure. Of the two, the Browns found that insulating their walls to bring them up to R-13 standards cut their energy loss by 33%. Putting in new low-e thermopane windows reduced energy loss by another 14%. So just those two upgrades cut their utility bills almost in half for as long as they own their home.

Adding insulation can be a chore. To do it right, you really need to remove the interior walls, install the insulation, and then, obviously, put up new walls. That can be a daunting task for even the most enthusiastic and “handy” homeowners.

A more simple alternative to new drywall is to drill holes in existing walls either inside or outside and blow in cellulose insulation. Either way, there is no other improvement you can make that will save you more money or reduce your family’s carbon footprint more. In attics, insulating power up to R-49 can be achieved. Since most of the energy a building loses or gains comes through the roof, adding extra insulation in the attic is a relatively easy and inexpensive efficiency upgrade.

New windows are easier to install than insulation, but the initial cost is higher and the energy bill savings aren’t always as dramatic as they can be with insulation. Still, new windows look great, can make a huge difference in air circulation within a home, and add value to a property that any potential buyer can see right away.

For their home, the Browns considered using triple glazed glass in their new windows, but decided the extra energy savings were not worth the cost in their relatively mild climate. For others who live where the winters are long and cold, though, the extra insulating power of new windows with three panes of glass in each sash would probably be worth the extra cost.

There are lots of other ways to improve the energy efficiency of your home – caulk windows and doors to reduce drafts, install LED lighting and upgrade to Energy Star appliances. But you should upgrade your insulation and windows first. That’s where the biggest improvements in energy efficiency – and the largest reduction in utility bills – can be achieved.

You can check out the Browns’ blog on AOL here, which has a number of great photos of their updates and upgrades throughout. Enjoy!