This Solar Cell Stores Its Own Power Like a Battery 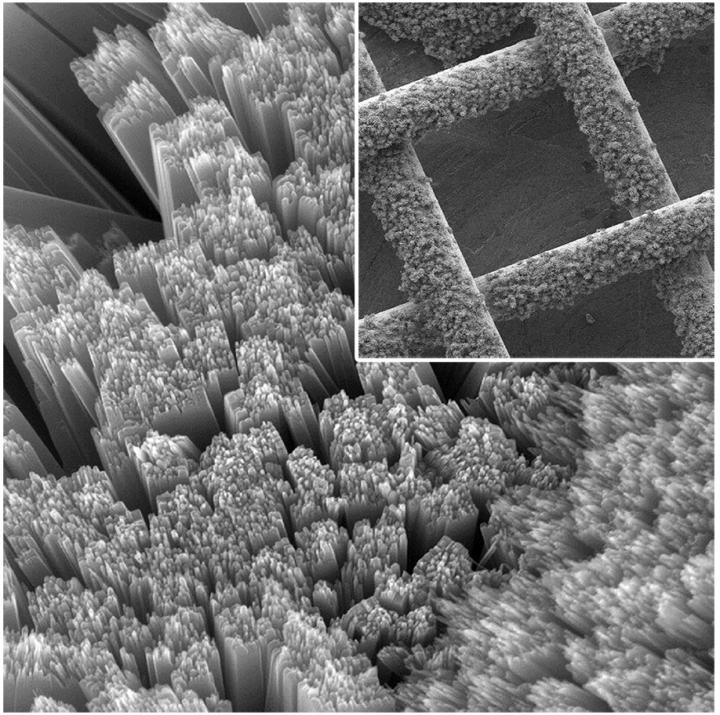 Researchers at the Ohio State University have invented a solar battery — a combination solar cell and battery — which recharges itself using air and light. The design required a solar panel which captured light, but admitted air to the battery. Here, scanning electron microscope images show the solution: nanometer-sized rods of titanium dioxide (larger image) which cover the surface of a piece of titanium gauze (inset). The holes in the gauze are approximately 200 micrometers across, allowing air to enter the battery while the rods gather light. Credit: Image courtesy of Yiying Wu, The Ohio State University.

This solar cell you see magnified in these pictures is unlike any other that’s come before it- because it stores power. This patent-pending device, invented at The Ohio State University, is the world’s first solar battery. This intention has plenty of potential to be a disruptive factor for the renewable energy industry.

In the October 3, 2014 issue of the journal Nature Communications, the researchers report that they’ve succeeded in combining a battery and a solar cell into one hybrid device.

The Ohio State University team reports that key to the innovation is a mesh solar panel, which allows air to enter the battery, and a special process for transferring electrons between the solar panel and the battery electrode. Inside the device, light and oxygen enable different parts of the chemical reactions that charge the battery.

The university will license the solar battery to industry, where Yiying Wu, professor of chemistry and biochemistry at Ohio State, says it will help tame the costs of renewable energy – a factor at the top of everybody’s wish list. “The state of the art is to use a solar panel to capture the light, and then use a cheap battery to store the energy,” Wu said in a press announcement. “We’ve integrated both functions into one device. Any time you can do that, you reduce cost.”

Wu and his students believe that their device brings down costs by 25 percent.

The invention also solves a longstanding problem in solar energy efficiency, eliminating the loss of electricity that normally occurs when electrons have to travel between a solar cell and an external battery. Typically, only 80 percent of electrons emerging from a solar cell make it into a battery. With this new design, light is converted to electrons inside the battery, so nearly 100 percent of the electrons are saved.

The design takes some cues from a battery previously developed by Wu and doctoral student Xiaodi Ren. This team invented a high-efficiency air-powered battery that discharges by chemically reacting potassium with oxygen.

The design won the $100,000 clean energy prize from the U.S. Department of Energy in 2014, and the researchers formed a technology spinoff called KAir Energy Systems, LLC to develop it. “Basically, it’s a breathing battery,” Wu said. “It breathes in air when it discharges, and breathes out when it charges.”

Doctoral student Mingzhe Yu designed a permeable mesh solar panel from titanium gauze, a flexible fabric upon which he grew vertical rods of titanium dioxide like blades of grass. Air passes freely through the gauze while the rods capture sunlight.

Normally, connecting a solar cell to a battery would require the use of four electrodes, while this hybrid design uses only three.

The mesh solar panel forms the first electrode. Beneath, the researchers placed a thin sheet of porous carbon (the second electrode) and a lithium plate (the third electrode). Between the electrodes, they sandwiched layers of electrolyte to carry electrons back and forth.

According to the inventors, the solar battery works in this manner: during charging, light hits the mesh solar panel and creates electrons. Inside the battery, electrons are involved in the chemical decomposition of lithium peroxide into lithium ions and oxygen. The oxygen is released into the air, and the lithium ions are stored in the battery as lithium metal after capturing the electrons.

When the battery discharges, it chemically consumes oxygen from the air to re-form the lithium peroxide.

An iodide additive in the electrolyte acts as a “shuttle” that carries electrons, and transports them between the battery electrode and the mesh solar panel. The use of the additive represents a distinct approach on improving the battery performance and efficiency, the team said.

The mesh belongs to a class of devices called dye-sensitized solar cells, because the researchers used a red dye to tune the wavelength of light it captures. In tests, they charged and discharged the battery repeatedly, while doctoral student Lu Ma used X-ray photoelectron spectroscopy to analyze how well the electrode materials survived—an indication of battery life.

First, they used a ruthenium compound as the red dye, but since the dye was consumed in the light capture, the battery ran out of dye after eight hours of charging and discharging—too short a lifetime. So they turned to a dark red semiconductor that wouldn’t be consumed: hematite, or iron oxide—more commonly called rust.

Coating the mesh with rust enabled the battery to charge from sunlight while retaining its red color. Based on early tests, Wu and his team think that the solar battery’s lifetime will be comparable to rechargeable batteries already on the market.

The solar cell project was funded by the U.S. Department of Energy.