Great research on solar cell efficiency improvements continues to be reported, this time from scientists in the University of Chicago’s chemistry department, the Institute for Molecular Engineering, and Argonne National Laboratory. We offer our highest praise to support the evolution of the renewable energy industry, which in turn, will boost better products for green building.

New light has been shed on solar power generation using devices made with polymers, thanks to a collaboration between scientists in the University of Chicago’s chemistry department, the Institute for Molecular Engineering, and Argonne National Laboratory. 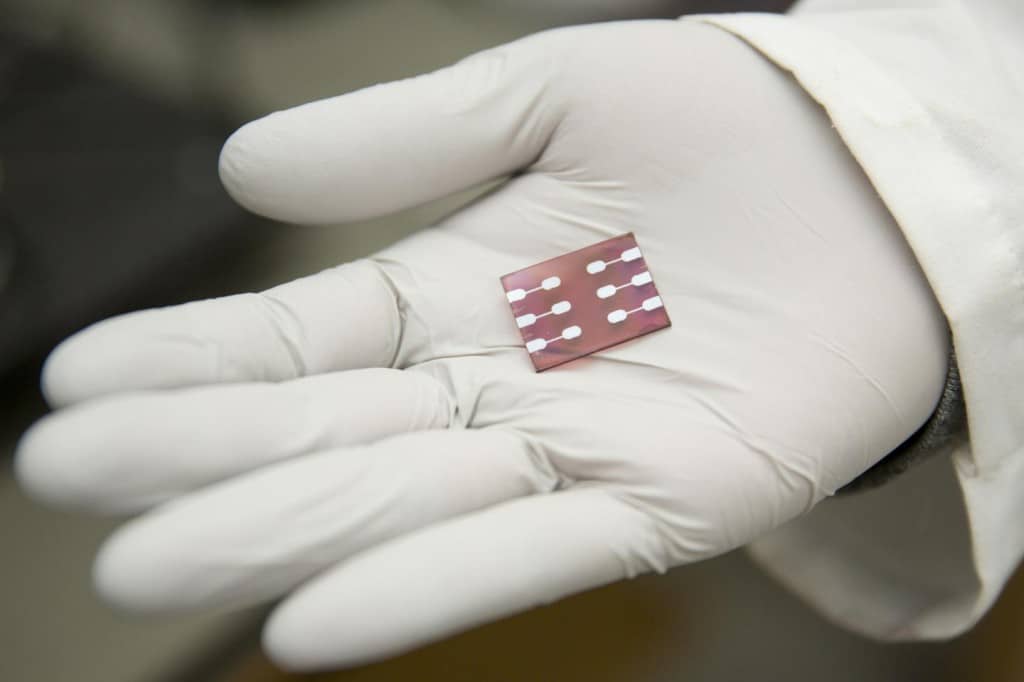 This polymer solar cell consists of a new polymer, called PID2, which was developed in the laboratory of Luping Yu, professor in chemistry at the University of Chicago. The new polymer improves the efficiency of electrical power generation by 15 percent when added to a standard polymer-fullerene mixture. Credit: Andrew Nelles

Researchers identified a new polymer — a type of large molecule that forms plastics and other familiar materials — which improved the efficiency of solar cells. The group also determined the method by which the polymer improved the cells’ efficiency. The polymer allowed electrical charges to move more easily throughout the cell, boosting the production of electricity — a mechanism never before demonstrated in such devices.

Solar cells made from polymers are a popular topic of research due to their appealing properties. But researchers are still struggling to efficiently generate electrical power with these materials.

“The field is rather immature — it’s in the infancy stage,” said Luping Yu, professor in chemistry, fellow in the Institute for Molecular Engineering, who led the UChicago group carrying out the research.

The active regions of such solar cells are composed of a mixture of polymers that give and receive electrons to generate electrical current when exposed to light. The new polymer developed by Yu’s group, called PID2, improves the efficiency of electrical power generation by 15 percent when added to a standard polymer-fullerene mixture. 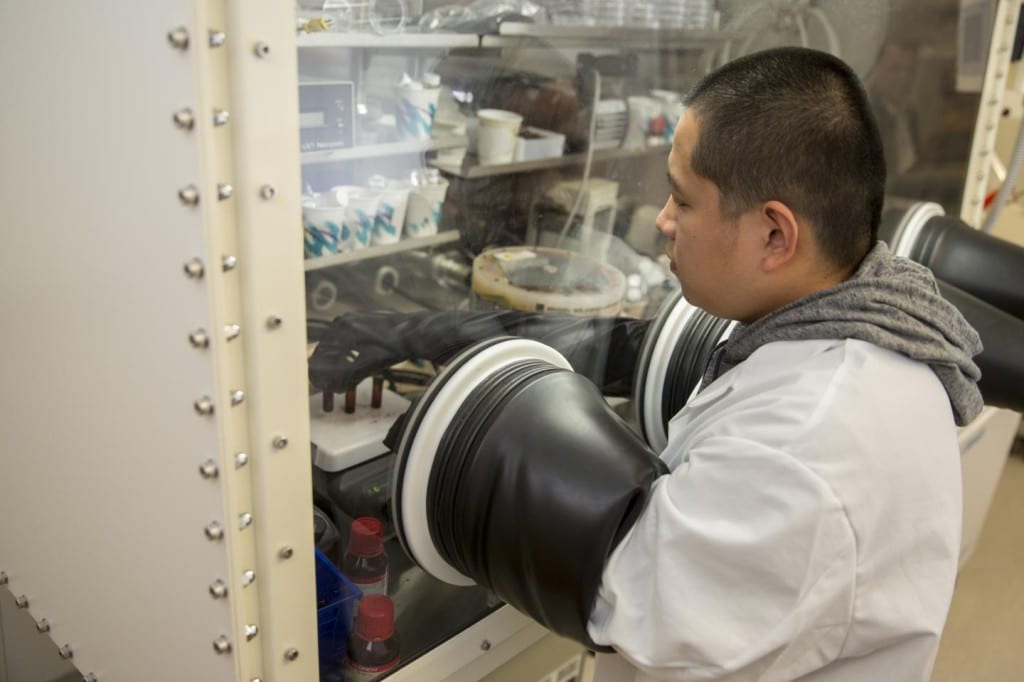 Luyao Lu, a graduate student in chemistry, works in the solar cell characterization facility of the University of Chicago’s Gordon Center for Integrative Science. Lu is the lead author of a Nature Photonics article describing the development of a new type of polymer solar cell that displays enhanced power conversion efficiency. Credit: Andrew Nelles

The group achieved an efficiency of 8.2 percent when an optimal amount of PID2 was added — the highest ever for solar cells made up of two types of polymers with fullerene— and the result implies that even higher efficiencies could be possible with further work. The group is now working to push efficiencies toward 10 percent, a benchmark necessary for polymer solar cells to be viable for commercial application.

The result was remarkable not only because of the advance in technical capabilities, Yu noted, but also because PID2 enhanced the efficiency via a new method. The standard mechanism for improving efficiency with a third polymer is by increasing the absorption of light in the device. But in addition to that effect, the team found that when PID2 was added, charges were transported more easily between polymers and throughout the cell.

In order for a current to be generated by the solar cell, electrons must be transferred from polymer to fullerene within the device. But the difference between electron energy levels for the standard polymer-fullerene is large enough that electron transfer between them is difficult. PID2 has energy levels in between the other two, and acts as an intermediary in the process.

“It’s like a step,” Yu said. “When it’s too high, it’s hard to climb up, but if you put in the middle another step then you can easily walk up.” 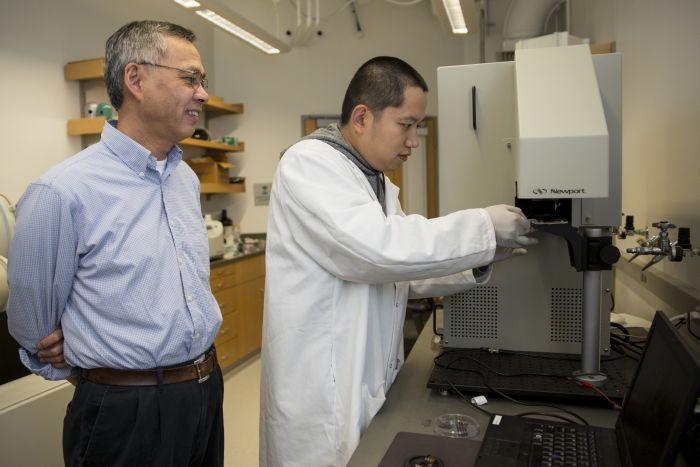 Luping Yu (left) watches as Luyao Lu prepares to measure the external quantum efficiency of their newly developed polymer solar cell. The new type of solar cell was a joint project of the University of Chicago and Argonne National Laboratory. Credit: Andrew Nelles

Thanks to a collaboration with Argonne, Yu and his group were also able to study the changes in structure of the polymer blend when PID2 was added, and show that these changes likewise improved the ability of charges to move throughout the cell, further improving the efficiency. The addition of PID2 caused the polymer blend to form fibers, which improve the mobility of electrons throughout the material. The fibers serve as a pathway to allow electrons to travel to the electrodes on the sides of the solar cell.

“It’s like you’re generating a street and somebody that’s traveling along the street can find a way to go from this end to another,” Yu said.

“Without that it’s hard to get insight about the structure,” Yu said, calling the collaboration with Argonne “crucial” to the work. “That benefits us tremendously,” he said.

Chen noted that “Working together, these groups represent a confluence of the best materials and the best expertise and tools to study them to achieve progress beyond what could be achieved with independent efforts.

“This knowledge will serve as a foundation from which to develop high-efficiency organic photovoltaic devices to meet the nation’s future energy needs,” Chen said.


« WWII Air Base Gets Turned into Sustainable Farm